Kuruma Reid balancing law and art with a purpose 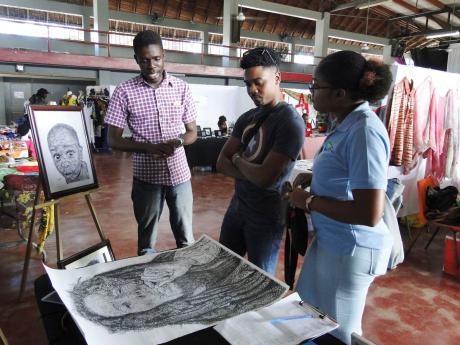 Kuruma Reid, a second-year student in the Faculty of Law at The University of the West Indies, Mona campus, is also an artist, who is making quite a name for himself.

Though he grew up around a cousin who did some amount of comic drawing, Reid told The Gleaner recently, that he did see art as something that could be a source of income.

He was seriously introduced to art while he was a grade 10 student at Jose Marti Technical High School in St Catherine. He was encouraged to enter art competitions by his teachers, Nadine Clemetson (his mentor), Jonathan Fraser and Carol Brown, who introduced him to several artforms through which he could express himself.

He did much still-life drawing, but admitted he still was not very excited about art. He simply did what he was told to do. After he got a Grade Two at CSEC, he said he started to have a greater appreciation for art. He went on to get a Grade One at CAPE Level One, placing sixth in Jamaica for visual arts.

At CAPE Level Two the art bug gave him a big bite, giving him something to think about.

“This is where I realised art was my actual niche … When I saw that it took me aback.”

He made a decision to study law at UWI, Mona, over art at Edna Manley College. But studying law has not arrested him from his art, though he has admitted that it is challenging. He is coping, and moreover law is informing his art.

“Law is all about critical analysis, it’s all about deep thinking, it’s all about reasoning; art is something deeper than just picking up a paintbrush and a pen, paper or canvas,” he said, intimating that law has helped him to be more critical of his own art.

The budding lawyer described himself as a pen-and-ink artist, who uses three basic techniques: scribblings, pointilism and cross-hatching. Of them he says scribbling is much faster, and it creates more of a texture for his pieces, because of the rough-looking finishes.

He is using it to create portraits of mainly black people. This preference for drawing black faces, he says, is “not to show any racial preference or racial discrimination”. But, he believes the black skin, with its varietyof shades, is easier is capture with this technique.

Focusing on black faces is also about paying homage to his culture, using his art to highlight the Afrocentricity of the majority of the Jamaican people. “In every piece I have done, except for commissioned pieces … you will see some aspect of Africa in them, whether it is beadwork, piercing, whatever … ,” he said.

It is also an appreciation for his own black skin, for which people have paid him compliments, over and over again.

And while he feels that black skin Jamaican men who bleached their skin are entitled to their opinion, he said, “In a world that is fighting against black people this is the time you should accept your complexion even more, and your complexion is not just the colour of your skin it is your history.”