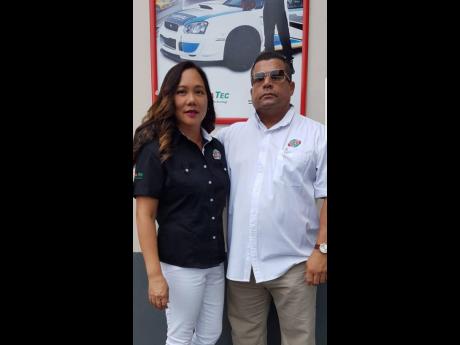 If there ever were a pair in Jamaica who embodied the mantra, ‘teamwork makes the dream work’, it would be Wendy and Peter Rousseau. The couple, who has been married for 35 years, operate the RUBiS Energy Jamaica Falmouth and Ocho Rios Service Stations, and make it a point to actively participate together in the daily operations of both businesses.

Their story, however rare in modern times, is one of fate, romance, consistency and perseverance, playing out across the borders of the United States and Jamaica. The couple has three children together and they believe that love, commitment and dedication, are the pillars that made their entrepreneurial dream work.

Wendy explained, “Most of the locations that we’ve managed or operated, are open 24 hours, so you’re always on call. It helps when your partner is understanding. From working together, we can share issues, concerns, ideas and problem solving. We have that commonality.”

Peter agreed, adding, “We’ve also seen a lot and been through a lot, and because of this, we just withstood the test of time.”

The happy couple’s most recent business venture is the Dealership of the RUBiS Ocho Rios service station, which was previously managed by RUBiS under the company-operated model. They have over 10 years experience working in the petroleum retailing industry, proving yet again that the two thrive, working as a duo.

But Wendy admits, “I never pictured myself being the proud operator of multiple petrol stations in Jamaica. In fact, growing up, I always thought I’d be in finance.”

The Florida International University alumni explained, “One of my jobs while going to school, was that of a secretary at Southeast Bank in their financial centre. Everyone was dressed up in their suits with their attaché cases, and it was so glamourous. I thought: ‘yeah, I could do that’. But not everything in life is as you plan.”

Peter, on the other hand, had been planning since the couple first met in preparatory school at the age of eight. When asked what attracted him to Wendy, his answer was simply: “You just know.”

They didn’t begin dating until they were teenagers, and, at the time, Wendy’s parents operated a food wholesale in Jamaica, before moving the family to Florida during her teen years. There, they opened a successful fitness equipment and bicycle retail store that both Wendy and Peter would later join after completing university.

Shortly after, the pair decided to seal the deal by getting married in their early 20s. Eventually, they returned home to their native St Ann and later began their career in the petroleum trade before their formal association with RUBiS Energy Jamaica Limited, when the entity entered the local market in 2013.

The Rousseau’s work very hard to ensure that their service stations are a success. They attribute their success as dealers to their unique approach to management – they make it a priority to forge strong relationships with their customers by being on the ground every day. They also try to play an active role in the lives of their 75 staff members.

Peter says, “We believe in leading by example. Our staff is the first and last impression a customer will have of the RUBiS experience. If they treat the customers good, then you will have return customers.”

To this end, Peter ensures that he gives excellent customer service as an example. He says, “For every customer that comes in, I greet every one of them and I know 90 per cent of them personally.”

He also ensures safety protocols are adhered to, on the site while supporting Wendy as she does the books and manages staff.