Shawn Muir wants to secure a future for his boys 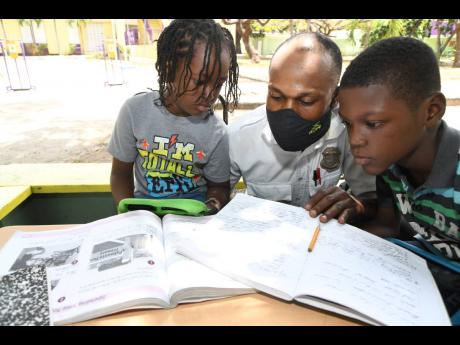 Rudolph Brown/Photographer
Even though he’s not able to monitor them for the entirety of his 12-hour shift, Shawn Muir (centre) says his sons, Dai-Shawn (right) and Nashawn, do well in school, and he loves spending time with them. 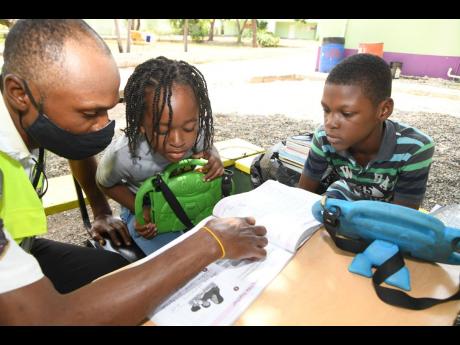 Rudolph Brown/Photographer
Shawn Muir (left), a security guard at Liberty Academy at Priory in St Andrew, takes his sons, six-year-old Nashawn and 10-year-old Dai-Shawn, to work with him so that he may help with their online schooling. 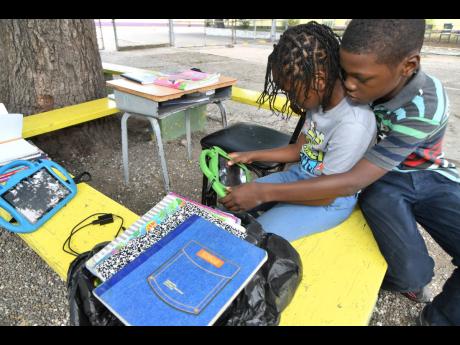 On a bench under a tree at the Liberty Academy at Priory in St Andrew, 33-year-old Shawn Muir guards the property while supervising and assisting his children with their studies.

The Jones Town native says it eases his mind to see and help them with their lessons.

Muir and his two sons wake at 4:30 a.m. on weekdays to make their way from their home in Kingston to the institution located on Hope Road in St Andrew.

The mother of six-year-old Nashawn packs a lunch and helps prepare the boys for the day.

“When we reach up, we get them something in their stomach then get them ready for online classes,” explained Muir, whose shift begins at 6 a.m.

The security guard, who has been stationed at the school for seven years, recalled an incident that left his then-infant son, Dai-Shawn, with serious burns.

“Dai-Shawn was a baby, and he was over our neighbour, and some porridge was cooking, and I don’t know what happen, but it end up that porridge drop in his diaper, and him get some burns,” shared the father of two.

The 10-year-old grade four student at Mico Practicing and Junior High School in Kingston still receives treatment for his burns and is due a fourth skin graft.

Muir has been a constant on this journey as he has been his primary parent since he was two years old.

“From me and his mom relationship end, is me have him. I just try to be there for him and mek sure that him all right.”

A former student of Trench Town High School, Muir exited high school after grade 10 due to violence in the community.

“It was little before they build the housing scheme, and it was pure bush. I used to sit down in class and see everything weh a gwan. Shot a fire and lodge in the building, and stuff.”

Afraid and troubled by the violence, he asked his parents for the opportunity to switch schools, and as this was not granted, he moved on to study welding through Operation Friendship.

However, with the impending arrival of his first-born, Dai-Shawn, he decided to seek work in security services. Shortly after, he was placed at Liberty Academy at the Priory, where he has found another family among the faculty and parents.

Suzanne Williams, executive director at Liberty Academy at the Priory, says the children are well-behaved, and as such, it was no issue when Muir started carrying his two boys.

“Truth be told, we have several employees at our school, teachers included, who asked if they could bring their children along because they had no one to leave them with at home.”

Deciding that their staff would be able to focus, knowing their children are safe and able to do their lessons, an area was created for those children to stay during the day. This led to Muir asking for permission as well.

“He would keep him (Dai-Shawn) in a place where he could monitor him. At the time, we had no idea how long this would last, but in observing how he managed his child, we felt very positive about it, and now he has brought in a second child (Nashawn). He has been doing this for several months now, and we have never had any problem. They are polite and very well-behaved!” said Williams.

Even though he’s not able to monitor them for the entirety of his 12-hour shift, Muir says they do well in school, but they sometimes slip up on the reading.

The patriarch says he loves spending this time with his children. It’s a learning experience for him as well, and he says it’s a passion he just can’t shake as he did the same for his stepdaughter, who now attends Merl Grove High School.

Like many other Jamaicans facing financial struggles, Muir only wants to keep his children on the right path.

“I just have to keep firm in their life. Grow them positive and let them pay attention to their school work. I know they will see the success of it. “

For those fathers struggling with the responsibility of fatherhood, Muir had this advice.

“You just have to keep your head up. Keep moving. Don’t mek nuthin break you down. Keep strong. No matter what you have to give, keep the love around the kids. Let them feel your presence. Let them know that they are special every day.”