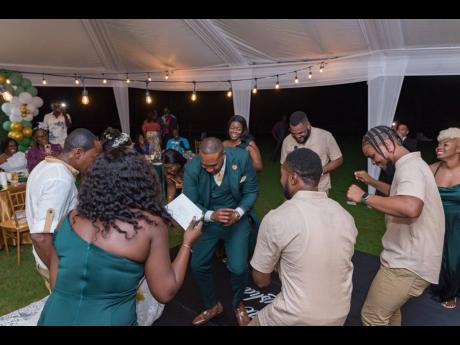 Contributed
The newly-weds and bridal party make a festive scene on the dance floor of the wedding reception. 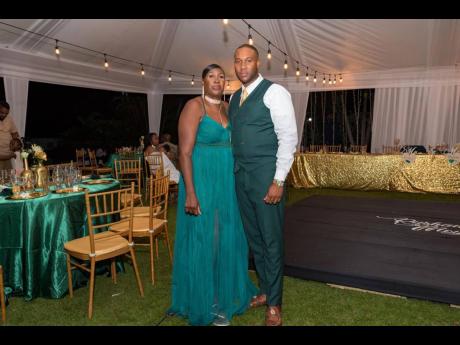 Contributed
The groom is joined by his mother, Sandra Morris, representing her maternal status in elegant green. 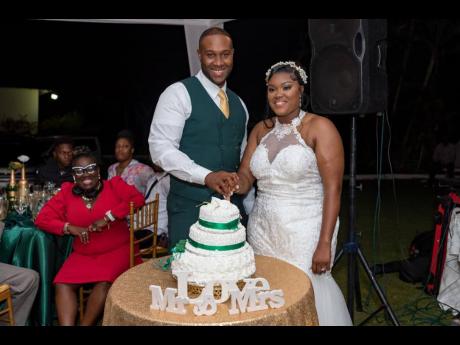 Contributed
The bride and groom engage in the traditional cake-cutting ceremony at the reception. 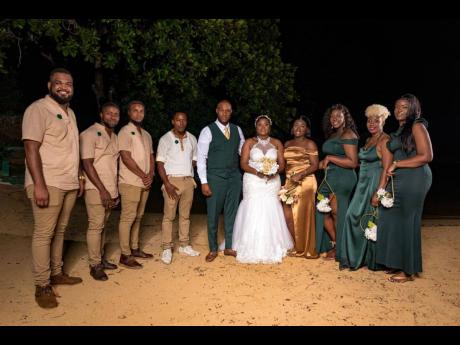 Contributed
The Walterses’ supportive bridal party was adorned in a combination of khaki attire for the groomsmen and green and gold for the bridesmaids. 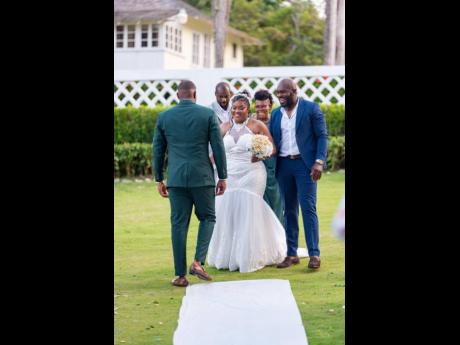 Contributed
The beautiful bride was escorted up the aisle by her mother and two uncles. The bridal march team was met by the handsome groom who took his wife-to-be by the hand and carried her the rest of the way. 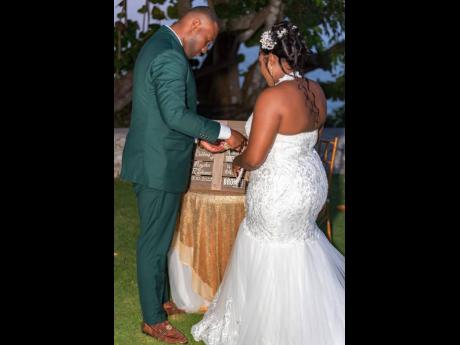 Contributed
The Walterses during the enchanting wedding ceremony. 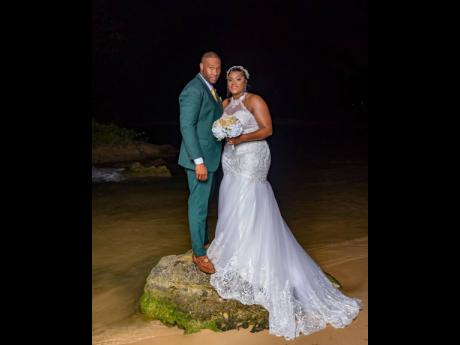 Contributed
What started as a messages exchange via Instagram for Rushane and Moysha progressed to an after-class encounter at the bus stop of the Caribbean Maritime Institute (now university) before taking flight all the way to ‘I do’. 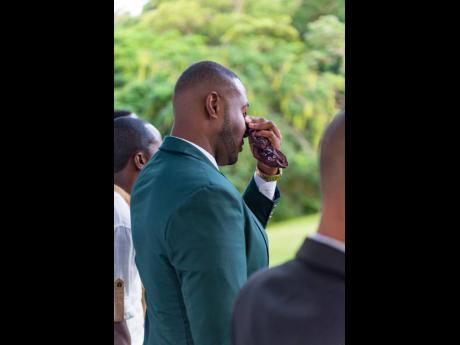 Contributed
Rushane was overcome with emotions when he laid eyes on his gorgeous bride, Moysha. 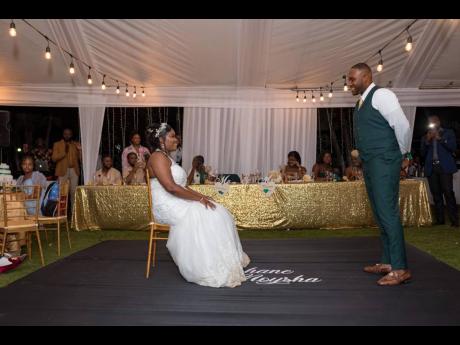 Contributed
With the hidden treasure of the garter on Rushane’s mind, all eyes were on his main prize: his wife. 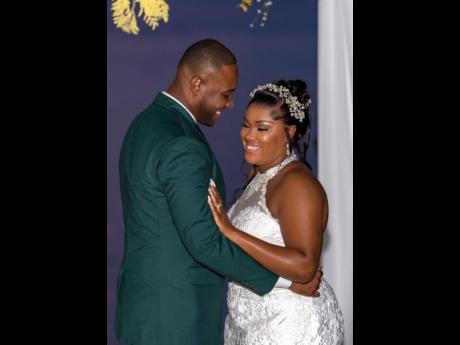 Before becoming a college student, Moysha Brown recalled corresponding with a male associate via Instagram about enrolling at the Caribbean Maritime Institute, now university, the following school year. In October 2015, while heading home after class, her virtual world collided with reality as she saw the same young man waiting for a bus by the Port Royal campus. Their exchange sparked intriguing conversation and romance. To the world, he goes by the name Rushane Walters, but to Moysha, he is her beloved husband.

“Initially, I found him to be handsome and talkative. For our first date, we went to the movies, and while I was upset that the film we went to watch was sold out, we still had a nice time,” Moysha told Island Wedding. Humble, ambitious, hard-working, unselfish and helpful, she admires the fact that he started from nothing to become the man he is today. “With the odds against him, he worked assiduously to come out on top. He’s the type to help others without thinking about himself first,” she added.

He encourages her to remain calm in all situations, even when things aren’t going the right way. And he applies his ‘don’t give up’ attitude to their relationship, which aligns with Moysha’s positive way of thinking. “He always says bad times don’t last. Once we stick together, we can overcome anything.

Rushane remembers the beauty at the bus stop as someone who was easy to talk to. After a few days of conversing and finding out that they had many things in common, the two embarked on a thrilling journey together. “From the day I met her, she has been loving, caring, helpful, honest and ambitious. She encourages me to stay focused on what I want and gives me the support I need to reach any goal I set out for,” he shared. Communication is always a key point for the couple, and Moysha ensures that it is maintained and that the two remain on the same page, for the health of the relationship.

When asked about their interests as a couple, like two peas in a pod, the pair shared similar responses. “Because of his love for planes, we enjoy going by the airport [and] watching them landing and taking off,” Moysha highlighted.

“Our favourite chill spot to hang out is by the airport runway where we both like to see the planes take off. I would teach her about all the different types of planes, with some food present, of course,” Rushane added, with a laugh.

After courting for three years, Rushane stepped up to the marital plate and asked Moysha to marry him.

“I had a surprise party planned for her at a local restaurant on her birthday. I had a friend carry the engagement ring so that I wouldn’t blow the surprise. After dinner, I started by expressing how much she meant to me. And then, I went on one knee and presented the ring I had gotten for her as a sign of my love and as a sign [that] I wanted her to be a part of my life forever,” he revealed of the engagement.

Rushane’s elated fiancée shared, “For someone who is shy, he did really great. After giving a toast at my birthday dinner, he went down on one knee and popped the question. I naturally said ‘yes’.”

To facilitate the couple’s marital vision, Moysha did away with a wedding planner and put plans in place to make the wedding dreams an enchanting ‘I do’. “We always talked about a beach wedding but later changed our minds. I wanted a garden wedding with the ocean in the background. At times it was very stressful, especially choosing the right décor items. But, with the help of Beez and Balloons, it was made a reality. My cousin, who was my maid of honour, and her brother, who is also my cousin, and his wife helped a lot as well.”

On October 13, Moysha and Rushane tied the knot at Laughing Waters in Ocho Rios, St Ann. Moysha was a vision of stunning regal elegance in her white mermaid-cut wedding dress. Rushane framed the angelic picture decked out in a green suit.

The groom also chimed in by stating, ”We shared some pretty memorable moments during the ceremony. But, for me, my best moment was looking into her eyes and sharing my vows, knowing this was it, this was the moment I would finally make her mine and mine forever.”