Sligoville in the shadow of a dream 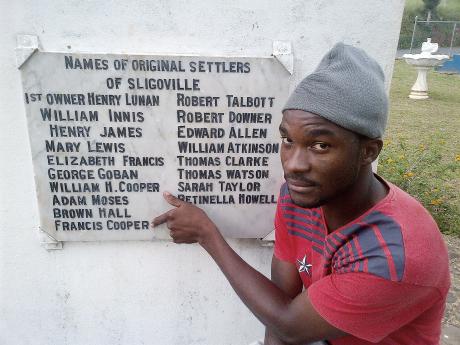 PHOTO BY Paul H Williams Dalton Cooper of Sligoville, St Catherine points at the names of two of the original free villages.

HIGHGATE IN St Catherine was set up as Jamaica's first free village in 1835, one year after The Gleaner was established. It was renamed Sligoville on June 12, 1840 in honour of Howe Peter Browne, the second Marquess of Sligo, governor of Jamaica 1834-1836.

Interestingly, though Browne returned to Ireland in 1836, some of his descendants are still in Jamaica, doing well. The Gleaner, too, is doing very well. It has grown to be a media giant, despite challenges over the years.

A Gleaner news team visited the historic village earlier this year. The Sligoville police assisted the team in locating people who could talk about the community with authority, and there were other helpful people we simply chanced upon.

It is not a place that wreaks of its historical significance at first glance, but there are material vestiges of its history, some archaeological, others are covered by vegetation. It must have been the dream of those who established it for it to be a place of prosperity, where the newly free residents would flourish.

But it seems that after establishment, not much was done to develop the village infrastructurally. It turns out that Sligoville, like so many of the free villages set up after Emancipation, has no strong economic base. One resident commented that "it is the first and the worst".

It encompasses 11 districts, scattered all over its hilly terrain. Small farming is the main way of eking out a living, and this has been so since it was established. It is a quiet, laid back community, too quiet for some people, perhaps.

Indeed, the town 'squares' were not oozing life when Rural Xpress visited twice. We found some young people in a little shop doing absolutely nothing. Cooper was among them. It is a hard-knock life they live in a place of bad roads and stone tanks. Rain water is more of a constant than piped water.

It is all about using whatever resources there are to survive in Sligoville, and the lack of employment opportunities is the biggest challenge residents are facing. George Bailey, a farmer of many years, lamented the constant movement of human resources from Sligoville, because after acquiring an education, there is not much that graduates can go back to.

Yet, all is not lost; there are in fact people in Sligoville who have worked over the years in developing the community. They did not leave, and through their efforts might not have significantly transformed the community, they have made inroads. People like the recently deceased historian Sylvester Ayre, Justices of the Peace Eunice and Harry Baird, retired educator Clovis Brown, Nurse Eileen Lewis, retired policeman Ranklyn James and entrepreneur Merrick James.

The main road that runs through it is smooth, and the recently refurbished mini stadium looks refreshing. Big concrete houses are perched on hilltops and hillsides. The vegetation on the hills is lush, and the weather is still salubrious.

But Sligoville, dashing first from the free village starting blocks, seems to be jogging way behind in the development race.