In the spirit of Revivalism – Part III 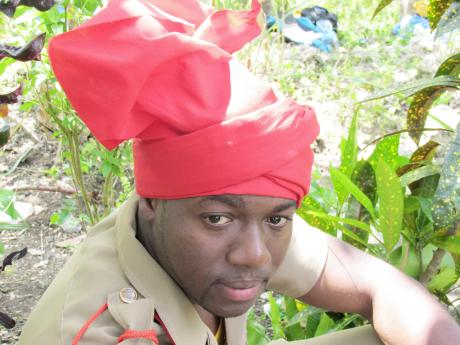 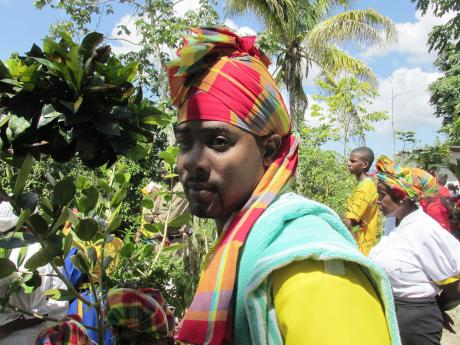 Paul Williams
The colour, style, and wrap of the Revival turban are for different purposes. 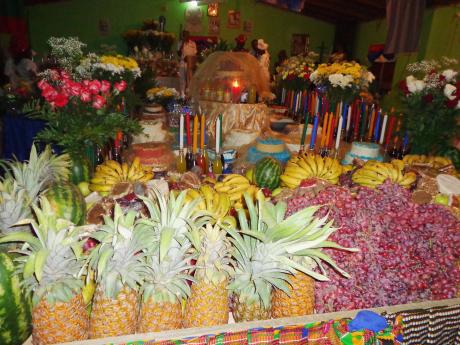 Paul Williams
The Revival table represents communication and communion between the living and the departed. 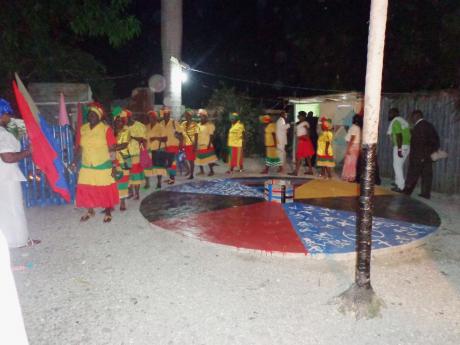 Paul Williams
People marching around the seal, a sacred space at the Revival mission yard, at Seafort, St Thomas.
1
2
3
4

REVIVALISM IN Jamaica evolved out of Myalism, another Afrocentric religion whose purpose was to rid the land of evil charms and to heal the spiritually and physically afflicted.

Revivalists believe in the Holy Trinity (Father, Son, and Holy Spirit), and they see no separation between the earthly and the spiritual realms.

As such, there is communion and communication between the living and the departed through the conduits of spiritual possessions, signs, dreams, and visions. Zion people call upon sky spirits such as archangels and angels, while Pocomania invokes earth spirits, such as fallen angels and water spirits.

Because of the spiritual nature of Revivalism, Revivalists use many artefactual symbols to represent elements of the religion. From their attention-grabbing attires, adorned with sundry paraphernalia, to the objects they use in their services and rituals, Revivalism is replete with

One of the symbols of Revival is the turban, wrapped, styled, and embellished in a variety of ways. It is one of the most recognisable symbols of Revivalism and has given use to the term 'wrap-head church'. The wrapping of the head and how it is wrapped has many symbolic reasons, likewise the things with which the turban is adorned.

Early this year, Family and Religion spoke with Pastor Henry Hunter of Morant Bay, St Thomas at the first 2015 quarterly conference held at the Zion Headquarters and Jerusalem Schoolroom in Watt Town, St Ann, about the Revival turban. He said the turban represents many things. For instance, Henry said his black turban, which he calls a diadem, represents power and authority.

The colours and styles of the turbans are based on how the wearers are instructed by angels and the angels with whom that they are working. It is also "a spiritual covering of the head", he said. "Because, you see, as servants of God, being faithful to God, we will come under spiritual attack. It's a war that we are in - a spiritual war going on between God Almighty and the devil," he said.

Family and Religion also spoke with Revivalism scholar and researcher at the University of the West Indies, Mona, Dr Clinton Hutton. He said the influence of the turban is to attract a particular type of spirit. In this case, Hutton said the turban is like an altar, a seal, as it is adorned with objects to induce spiritual possession. In this case, the spirit takes over the head of the wearer until the possession is over.

"The seal, a consecrated space, is where Revivalists do their cleansing (cutting and clearing) and invoking of spirits. These seals, or sacred ports, or docks, or spirit-empowered devices, are an assemblage of a multiplicity of natural and/or manufactured ritualised objects abounding with movement (aliveness) from the interplay of shapes, colours, light, shade, and texture," Hutton writes in Jamaica Journal Vol. 32 Nos. 1-2.

The name of Hutton's article in the journal is 'The Revival Table - Feasting with the Ancestors and Spirits'. In it, Hutton writes about the symbolism of the Revival table, another important Revival symbol. It is an elaborately set table of cooked and baked food, fruits, citrus, liquor, candles, and other objects.

In explaining the motivation for the setting up of the Revival table, Hutton writes, among other things, "The ritual feedings of the ancestors and ancestral gods is, in some respects, quite pervasive and central to the way that many people in the African diaspora make sense of their existential reality and sense of self." It is to communicate with and have communion with the ancestors.

Outsiders who do not understand Revival symbolism have come up with their own interpretations. This misunderstanding has led to much distrust of and disdain for Revivalism, which is often vilified as an evil cult. This attitude towards Revivalism is as old as the religion itself.

Yet, no other religion or movement in Jamaica has influenced popular culture and the arts more than Revivalism, the dramatic ritual that it can be. "Revival music, dress, and behaviour have inspired novels, poems, plays, dance theatre and reggae music ... ," Olive Senior writes in Encyclopaedia of Jamaica Heritage.