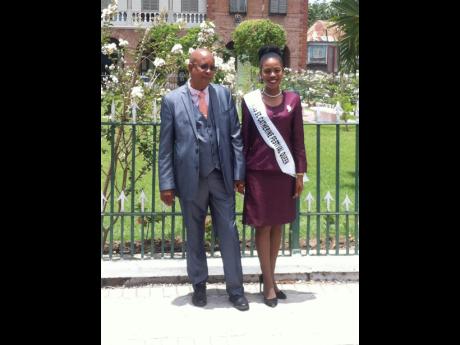 The 24-year-old graduate of the University of Technology told Rural Xpress in a recent interview, while paying a courtesy call on Spanish Town Mayor Norman Scott, that she was doing everything she could to win the national title.

"My call on the mayor is aimed at creating community involvement and awareness as I position myself to excel in areas that are important to the judging of the contest," Coleman said.

Addressing the mayor directly, she said St Catherine was one of the largest and fastest growing parishes in Jamaica, and there are vast resources to position the parish for growth and development.

"The historical significance of St Catherine cannot be denied. The first capital of Jamaica was Spanish Town. This was once where all the administrative tasks for the country took place during the periods of the Spanish then British colonisation," Coleman stated, adding that, to date, much of Spanish Town is characterised by the architectural influence of those periods, giving the area a unique identity and charm.

She went on to highlight the numerous historical sites in the parish, which she said stand today as lasting testament to the progress of Jamaica as a nation.

"Sites such as Emancipation Square, where the emancipation declaration was read, should be renovated and added to the many places of interests for tourists and Jamaicans.

In addition, other historical sites such as the Phillippo Baptist Church; St James Cathedral; the Taino village in White Marl; The Two Sisters Caves in Portmore; Colbeck Castle in Old Harbour; Sligoville, the first free village; and Pinnacle, the first Rastafarian Village, should all be packaged as part of St Catherine's heritage-tourism offerings," she declared.

According to Coleman, tourism and agriculture in St Catherine have great potential and, with the right investment, the parish can play an even bigger part in food security. She said the soil was fertile and the climate was just right to produce food for Jamaica to export to other countries.