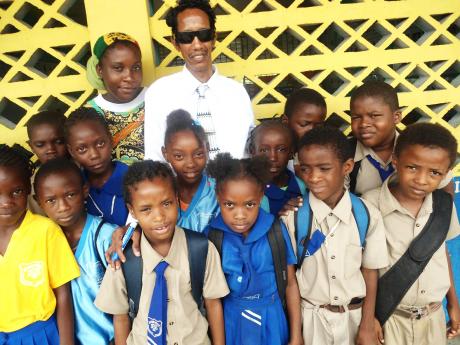 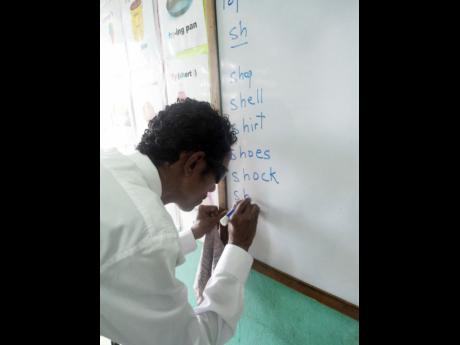 Shanique Samuels
Meeks Campbell writes on the whiteboard notwithstanding his disability.
1
2

MEEKS CAMPBELL may be visually impaired, but he is as good a teacher as any with sight.

Campbell found out he was going blind just as he was writing his final-year exams at St Joseph's Teachers' College in Kingston.

"I could not even see the lines on the paper to write the exam, but I asked someone to read and I wrote what I could and I passed," he recalled.

Campbell was diagnosed with Marfan's syndrome, a genetic disorder that affects the body's connective tissue. He developed cataract, which further complicated his condition. He underwent surgery and was fitted with artificial lens that made him see like never before.

"I was born nearsighted, but after they put in that lens, I realised what seeing was all about. I could actually see better with the artificial lens than I could naturally," Campbell told Rural Xpress.

Two years later, the lens slipped out of place, causing the retina to be detached. This further complicated his visual ability as he had already lost one of his eyes to a childhood injury at 12 years old.

Campbell, now 38 years old, is a trained educator who graduated college in 2007 as a primary school teacher. He sees himself as a reading coach and literacy specialist who has consistently reaped success wherever he is placed.

"Ever since I left college, I have always got slow children, so that's why I specialise in reading. I always find a way to teach reading. I try to make reading easy, fun and interesting, so I use charts, technology, and any other material I can find," said Campbell.

He has worked in temporary positions at several schools in Clarendon and as far as Bethany Primary in Manchester.

"At one school, I felt I was dealt with unfairly because of my disability, despite the results I produced. I was working in a temporary position for another teacher, and the opportunity came up to be permanently employed, but the principal said he was not brave enough to employ me, and he went and employed someone else," Campbell lamented.

However, this did not put a damper on Campbell's dream or self-esteem as he later volunteered at several other schools, churning out results that far exceeded expectations.

He is currently on a five-month stint, which ends in August, at the Effortville Primary School in Clarendon, where he has been making great improvement in the classroom.

"At first, the students were in doubt, but when I started to speak, they watched me. When they saw how I delivered, after a week they started to gravitate towards me," he explained to Rural Xpress.

Inside the resource room, Campbell has created an atmosphere that makes the students want to learn. There are bright, colour-coded charts, pictures and a computer that is connected to a mini-sound system, which he uses to aid in teaching letter sounds.

Campbell is working with grades two to five students in reading and comprehension.

"I always challenge myself. I always try to find the students who have challenges, and they are the ones I take up and show them love, and be patient with them and teach them how to read."

Principal Adrian Sinclair said Campbell arrived at the institution at a time when the school was critically in need of a boost to its literacy programme.

"Within three weeks, we began to see improvement in Mr Campbell's children in reading and comprehension. He has proven himself so far, and although he is visually impaired, he is a man of vision."

Sinclair said he hopes the Ministry of Education will allow Campbell to stay on permanently as he is making great progress, especially with the slow learners.

Ilivia Archer, Campbell's teaching aide, said she does most of the writing for him. Archer said her son is also a slow learner and she has seen vast improvement in his reading ability since he has been under Campbell's tutelage.

"A lot of the children here are benefiting tremendously from Mr Campbell's presence, and I am confident that the students will make significant progress within the next two to three months," she said.