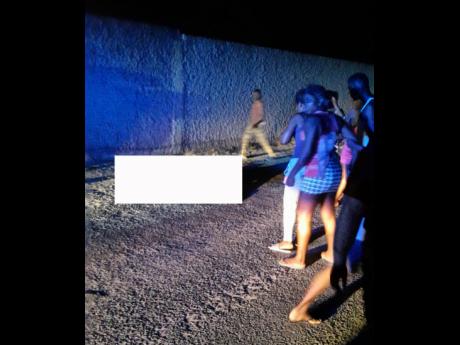 Individuals look at a bleeding woman laying on the street on an avenue off Spanish Town Road. It is alleged that the woman is Constable Thomas.

There are allegations this afternoon that the police may have been negligent in providing a quick response which could have saved the life of the policewoman who was shot dead last night.

According to information reaching The Gleaner/Power 106 News Centre Constable Crystal Thomas lay on the ground alive in her own blood for about half an hour before she was taken to hospital.

Individuals who claim to have been on the scene, and who provided photographs as evidence, said a police service vehicle had arrived on the scene while Constable Thomas was suffering from gunshot wounds.

According to the alleged eyewitnesses, officers in the vehicle refused to help the policewoman because they said they did not want her blood to "mess-up" the government-owned car.

It is alleged that the police personnel thought that the woman was a civilian and not one of their colleagues.

The pictures, obtained by The Gleaner/Power 106 News Centre, of last night’s scene show a bleeding Constable Thomas on the ground with her head slightly elevated.

Our news centre was further told that the young policewoman was gasping for air while on the ground.

The pictures also show a blue light, resembling that of a police service vehicle, in the background.

Constable Thomas was pronounced dead at the Kingston Public Hospital last night after she was subsequently taken to hospital by another police vehicle which later arrived on the scene.