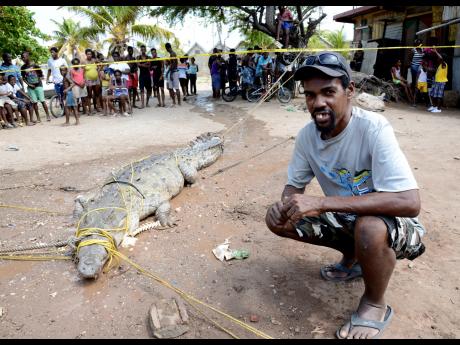 Ricardo Makyn
Ralph Hunt poses beside the crocodile he and others caught at the Rae Town Fishing Village last Friday.


Last Friday, Rae Town resident Ralph Hunt, with help from others from the community, captured a wild crocodile on the wet banks behind some of the houses in the area.

“I went down by Marcus Garvey Drive for work… And by time mi come back I saw a crowd… And dem said a crocodile was down there… And true (because of) the crowd… I gwaan wait until night,” said Hunt on the scene where the crocodile was captured.

He waited diligently until morning, when he saw the crocodile on the bank and attempted to capture it.

“And by morning I saw him on the banking… And I decide I was going for a piece of rope… And I threw (it) over him mouth with a piece of stick… And I hold him,” said Hunt.

He would not take all the credit for the animal’s capture, instead saying he couldn’t have done it without help from community members.

He also said that it was important that he and the rest of the community members stepped up to capture the crocodile.

“We just trying to prevent children from losing their lives.”

Dionne Rose, public education and corporate communications manager at the National Environment and Planning Agency, said that, under the supervision of the Urban Development Commission, her agency released the crocodile back into its natural habit.

Rose said this was the usual procedure for crocodiles are captured, noting that its natural habitats are wetland areas as well as the Kingston Harbour that communities located near these areas have a possibility of a crocodile sightings.

Rose urged civilians to not play hero or capturer when they encounter or sight such an animal.

“You should not try and capture it. Call our hotline at 1 888 991 5005 to report the incident to us and we will arrive with our technical team as quickly as possible or call the police,” Rose said.


When asked about Hunt’s claim that residents have sighted other crocodiles in the area,  Rose said: “We will investigate any such report or claim but community members should stay as far as possible from these animals, ensuring their safety.”