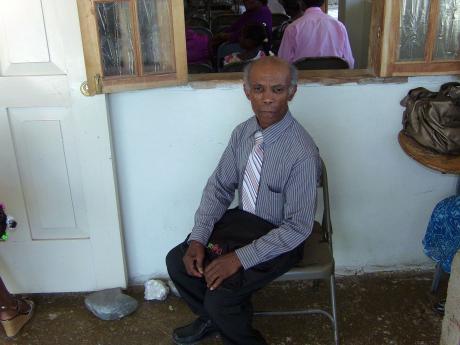 Despite being visually impaired, Leroy Gray, a devoted Christian, has not lost sight of God. And while many have fallen by the wayside, he remains committed and determined that he will gain his place in the heavenly Kingdom.

Gray began losing his sight more than eight years ago after visiting an ophthalmologist for a check-up, as his vision was somewhat blurry. The results were not what were expected, but according to the elderly man, he was at that age in life, where eyesight was expected to deteriorate.

"I was approaching 65 years, so I was not too bothered. The Bible clearly states that to everything there is a season. I have accepted my impediment gracefully, as God is still in charge. I have been a Seventh-day Adventist for approximately 30 years, and God has been good to me. I used to be a deacon, but since losing my sight, I have taken leave of that post," he added.

Gray, who is a farmer, also praised himself as a writer of poetry - something that he claims is a passion for him. He said many persons have, before his visual impairment, encouraged him to send his written material to The Gleaner for publication. But despite the encouragement from church members and others, his written material has remained in his possession.

On a Sabbath, Gray is basically led to church by a neighbour or a church brother, and loud exchanges of "Happy Sabbath!" is echoed by him, as he is led to his seat where he is often overheard singing loudly various hymns including Trust and Obey, I Serve a Risen Saviour, and My Maker and My King.

But since his condition has worsened, and with his brother Harold also getting older, the farmer is now making arrangements to stay with his sister in Kingston, where he will also continue to serve his Maker.

Gray is best remembered for a stance taken in church, where he urged members to show love and affection towards each other, and to assist the needy.

"I am down, but not out. I serve a risen Saviour, and I believe that I will be a part of God's Kingdom. Jesus Christ has done so much for me and it is my intention to serve him until I die."