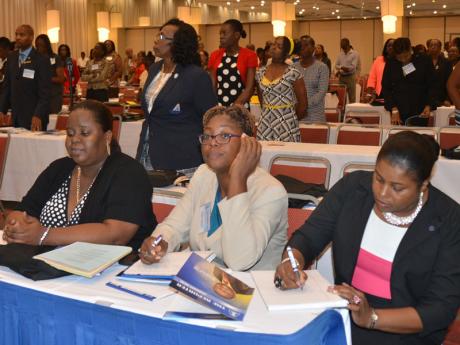 Secretary General of the Jamaica Teachers' Association, Byron Farquharson is unhappy about the number of human resource conflicts in schools which he says are burdening already scarce resources.

"We believe that there are too many conflicts within our schools," Farquharson wrote in the JTA's 2015 annual report.

The report was tabled this morning at the start of the three-day JTA annual conference now underway in Montego Bay, St James.

"As an association that represents both principals and teachers, we must find a way to create an atmosphere of peace, respect and harmony within our schools," Farquharson said.

He has appealed to teachers to seek the advice of JTA officers before engaging their principals or school boards.

Meanwhile, Farquaharson has taken issue with the behaviour of some school boards who he said are defying court orders to reinstate teachers.

"Some chairmen and boards are acting as if they are bigger than the law," the JTA secretary general charged.

Farqularson said, however, that the JTA will remain vigilant and unapologetic in defence of its members.