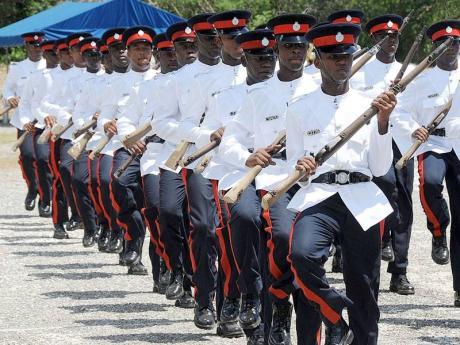 Among the five special awards presented to graduating cops at Friday's Passing Out ceremony in St Catherine was one for the recruit with the 'best Christian principles’.

Friday's presentation was not the first time, however.

The award, established in 1957 has been a feature of the Jamaica Constabulary Force (JCF) for the past 58 years.

But the head of the Jamaica Theological Seminary, Reverend Dr Garnett Roper, says the JCF should scrap the award.

"Christians in positions of power and authority need to be far more self conscious in the way they are using their office to convert," Roper said.

"Should the day happen when another religion enjoys the position of dominance that Christianity now enjoys, Christians will not be comfortable," he added.

"It was not intended to be discriminatory."

Meanwhile, Roper, a Missionary church pastor, says the award represents an imposition of beliefs that should not be done under a State that is secular.

According to him, the Police High Command should honour recruits for honesty, discipline and fairness but taxpayers’ money should not be used to reward persons in a secular entity for displaying any religious principle.

Roper, who said he initiated the use of prayers in police stations in the 1990s, argues that churchmen involved in police training are working for the State and not in their personal capacities.

However, Welsh maintains that the award is appropriate.

"While the term ‘god’ might be used by other faiths, our oath of office has the expression 'So help me God', and our understanding is that we’re talking about the God of the Christian faith," Welsh explained.

Social commentator Professor Carolyn Cooper and psychologist, Leachim Semaj agree that the Christian award is ‘important’ although they concede that a name change could be accommodated.

"The more Christian police we have, the better, because maybe we stand a chance that some of the Christian principles will be manifested in their actual behaviours in the line of duty,” said Cooper.

Semaj argues that the principles which Christianity hold dear are similar in other religions and so a recruit from another religion could win the award. The 'best Christian principles' award was created in 1957 by then JCF chaplain Cannon Hugh Smythe.

The winner is determined in a vote by fellow recruits and must have promoted Christianity their actions.

Earlier this year, the education ministry said it supports mandatory Christian devotions in public schools, a decision which angered critics including the National Parent Teachers’ Association. Last August, parliamentarian Damion Crawford alleged that Jamaicans are not pleasing the Christian God and they must change in order for the country to progress.