Young Kyle Williams gets his GSAT books in stores 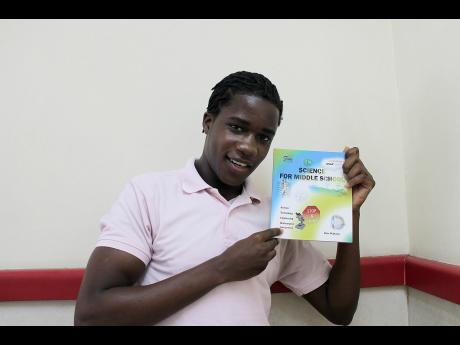 It began as a need to seek an avenue from which he could fund his tertiary education, but it was later overridden by his passion for the sciences and having primary-level students excel in the Grade Six Achievement Test (GSAT), and after months of hard work and dedication, Kyle Williams' book, 'Science for Middle School', is on the market.

The 21-year-old has been receiving positive feedback from schools.

"I actually took a year off from school to do this product, so I could perhaps have something to go back to in the event that what I'm pursuing doesn't go as planned, but I saw that there was a need for the perception towards studying to be changed, with the negative connotation associated with studying, the boredom and that sort of thing. I took up the challenge with the motivation of my mother and close relatives ..."

He added: "A lot of research was needed ... . I had to develop a sense of discipline to do feasibility studies and later compiling material while finding ways to incorporate fun activities that are not only fun, but informative to engage critical thinking."

The science, technology, engineering and mathematics integrated book was funded through monies Williams had for tuition, but he deemed it a worthwhile move.

"The feedback has been lovely. A lot of the schools where I have been doing the promotion already issued their booklist, but have expressed regret ... some schools have afforded me the opportunity to come in and talk to the children, and one particular school is looking to revise their booklist, though it has already been issued, to add the book, as well as allow me to talk to teachers."

Having word search puzzles and crossword puzzles replace fill in the blanks and other end-of-chapter tests, Williams stated that the book is a sure guide for fun learning.

"I really wish that everybody who is going to sit the GSAT, or anybody from grades four to six, have the experience with this book ... if you can complete all the work, the puzzles, the word search, then you are ready for the science exam ... as you open the book, you are captivated by the organisation of graphics. We have dissected the info into bits, it's not the block size that you are used to," Williams explained.

In the final stages of being passed by the Ministry of Education, Williams has so far sold 114 copies of his book over the last two weeks through the Sangster's Book Stores, as well as the Kingston Bookshop, where they have been made available.

Williams is also currently in the process of completing a new book, 'Social Studies for Middle School'.