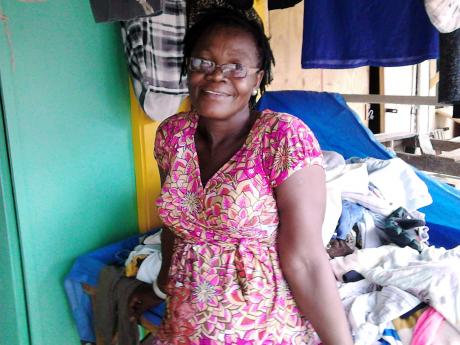 Gareth Davis Sr
Nadine Anderson at her store at the Musgrave Market in Port Antonio, Portland.

Nadine Anderson, a mother of six children, is boasting about her Christian experience, which continues to flourish with the many blessing bestowed on her by Jehovah God.

Anderson, who is a member of the Kingdom Hall of Jehovah Witness in Port Antonio, Portland, told Family and Religion that her family comprising five boys and a girl have found favour in the sight of God, who has helped to reshape their lives in more ways than one.

"My family are all Jehovah Witnesses,"she said.

"I was not always a Witness, but once I found the true religion, I made the switch with my family. Our teachings somewhat vary from other denominations, as we pray directly to Jehovah God, while others pray to Jesus Christ. We firmly believe that Jesus Christ died for our sins, however, what we don't believe is that the Father, Son, and Holy Spirit are one and the same," she added.

The mother of six children noted that since accepting the teachings of the Jehovah Witness, the pathway of her family has flourished, and that life has become a lot easier and less challenging, as their encounter with God has opened up windows of opportunity for them.

Anderson operates a small clothes store at the rear of the Musgrave Market in Port Antonio.

"As Jehovah Witnesses, we choose to obey God rather than men. Jehovah gives life, and we believe that what God says is more important than what man thinks. I have found the truth since becoming a Jehovah's Witness and I will stick to it until the end," Anderson said.