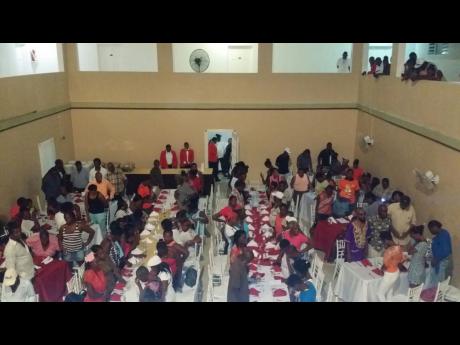 Gareth Davis
Supporters of the PNP's Andrea Moore gathered in Portland last night at a function to show their support for her.

As the race to select a candidate to represent the People's National Party (PNP) in East Portland intensifies, a large number of people said to be delegates last night turned out at a special function in support of challenger, Andrea Moore.

Moore, an attorney, is seeking to unseat Dr Lynvale Bloomfield in a selection slated for Sunday, September 6 at the Port Antonio High School. Last night, approximately 200 people said to be delegates, gathered at Hotel Tim Bamboo, most of whom were wearing t-shirts and caps bearing Moore's portrait.

With approximately 320 delegates eligible to vote in Sunday's selection, if Moore gets the support on the day, it could very well indicate a change of the guard in East Portland. "These are registered and legitimate delegates, who are fed up with the leadership style of the incumbent, " said Percival LaTouche, a member of Moore's campaign team.

He also dismissed claims that some of the supporters were being wooed by offers being made to them.

"Four years of neglect is enough to frustrate these delegates, who have made it clear in no uncertain manner, that enough is enough. Come Sunday my team will enjoy a resounding victory, " he added.