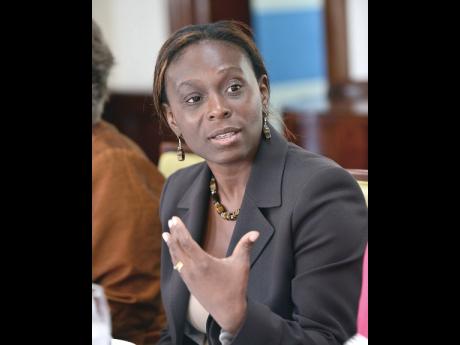 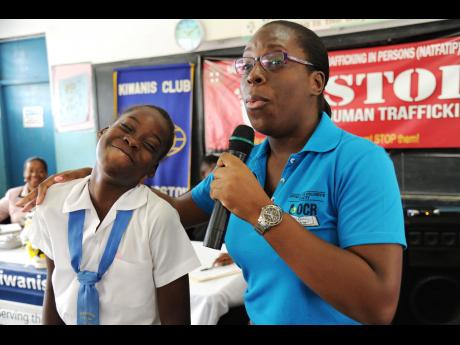 Ricardo Makyn
In this May 16, 2015 photograph, Cassetta Green, deputy registrar of the Office of the Children's Registry, demonstrates to Keya Anglin of Melrose Primary and Junior High how a human trafficker would take advantage of a child.
1
2
3

There are fresh fears that the level of human trafficking in Jamaica could be much worse than Jamaicans have been led to believe.

With no detailed study done to determine the severity of the problem, Elsie Laurence-Chounoune, United Nations Development Programme (UNDP) deputy resident representative for Jamaica, has warned that plans to address human trafficking could fail.

"I don't think the Government itself knows the extent of the problem because it hasn't been correctly identified, and if they don't know, they can't address it," Laurence-Chounoune told The Sunday Gleaner following an Editors' Forum at the company's North Street offices last week.

According to Laurence-Chounoune, the UNDP is working with the Ministry of Justice to identify and tackle the threat.

"First, what we have done is help them to establish a database including a lot of evidence in trafficking in persons. That database is actually accessible by several agencies or ministries. So if at any time any ministry would like to know what is happening where, (and) how many cases, they should be able to know," said Laurence-Chounoune.

She added that UNDP was also putting a team in place to undertake a landscape study to help local law enforcement identify the areas that are hot spots for trafficking in persons.

"The landscape study will tell them which parish they should focus on more, and where they should put, for example, shelters," Laurence-Chounoune explained.

"We are hoping to have it done by the end of the year. The landscape study will be funded by us, but after that, there is a lot more to be done, and this is how the other international partners can get involved in terms of prosecuting and repatriating some of them. But until you have the data to be able to make decisions, there is nothing you can do."

While welcoming the planned study, Minister of Justice Mark Golding rejected the notion that the police are currently operating blind.

"More accurate data would be useful, without a doubt, but the police do focus on areas where there is known to be a lot of illicit sexual activity," said Golding.

"It is an ongoing thing. We have a shelter in terms of trafficking; we have a programme of public education trying to sensitise the public as to what to look out for in terms of what amounts to trafficking, and so on."

Jamaica was ranked on the Tier 2 Watch List in the 2015 Trafficking in Persons Report of the United States State Department, which was released in July, and Laurence-Chounoune highlighted that only increased prosecution would see the country achieve an improved ranking.

Golding expressed displeasure with the method of ranking and also the country's latest ranking given all that he said had been done by the Government to arrest the problem.

"The truth is that the time that these cases take to reach trial, and some of the challenges, especially where the victim is from overseas, often they want to return home, and when they return home, they may not be willing to come back to give evidence," said Golding.

"So we find that can be a real challenge in prosecuting these cases to get the victims and other witnesses willing to stay the course."

Golding added that there is also the issue of trafficking cases being prosecuted for other offences not related to trafficking.

"So we can have offences that are akin to trafficking that are not counted in our statistics as being trafficking cases, and that is something that we are trying to work on to get better reporting out of the Resident Magistrate's Court, in particular, so our data is more accurate of the efforts we are making," said Golding.