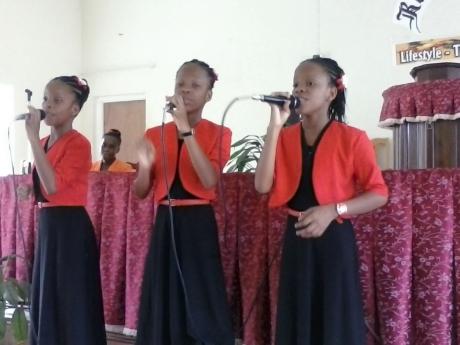 Contributed
From left, Malaika, Mikaili and Mahari ministering at a local church. 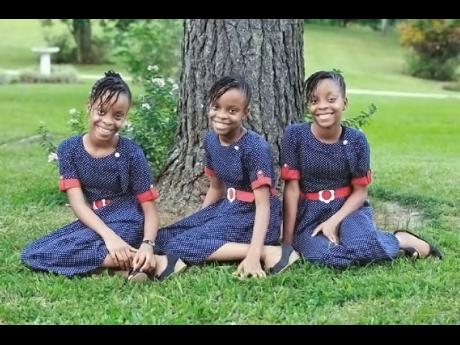 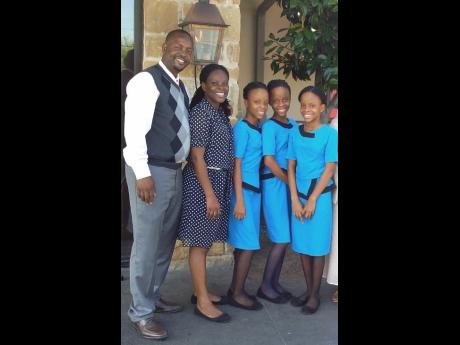 Being chosen by God to bring a life into this world is an extraordinary gift, but imagine being blessed with not one, not two, but three beautifully talented girls at the same time!

Markquin and Nicole Foster had their work cut for them in ensuring the needs of the three girls were met and, according to Nicole, all became manageable as God stood in the mix.

"One of the most difficult stages was when we just took them home from the hospital. But we were really grateful for the kind support from the nurses and doctors at the hospital who made the transition from hospital to home a smooth one. Special mention must be made of Dr Evan Nepaul and Dr Everton Hylton (now deceased) who contacted some organisations and got assistance for us in the form of diapers and formula for the first few months. Of course, when the supplies were discontinued, the financial demands were very heavy, but whenever there was a need, we presented it to the Lord and He was always on time."

While the excitement was still in the air about the Foster triplets, the couple had insomnia as their best friend, never leaving their side as long as the babies would awaken every two hours.

"In order to keep our sanity, we would just find things to talk and laugh about. So if someone was passing by our house in the night he/she would probably think we took some type of medication to evoke laughter."

Markquin added, "I remember clearly, one night when after running the 'production line', Nicole would feed one or two, I would burp, change, put to sleep and the process would continue. Just when we were about to go back to sleep, it was time for the process to start all over again. Sunrise was always a beautiful thing for us signalling that we survived one more night."

The girls who were dedicated to God from the womb were known to be extra special children when a clear declaration by the Holy Spirit was made for them to be homeschooled. According to their mother, this was a struggle but they soon realised that everything was happening for a reason.

"I wanted to be the best parent I could be so I learnt from good examples such as Hannah who made Samuel the object of her prayer; and Jochebed who trained Moses for the first 12 years of his life and he remained faithful to the true God; and the same thing for Jacob training Joseph."

She continued,"I can recall before age two, they were giving persons messages about Jesus and repeating Bible verses. At that tender age, there were adults who smoked and drank who would hide whenever they saw the girls because they had promised to stop. One evening, we were passing a man who used to smoke and when he saw the car coming, he hid the spliff and waved at the girls. We then stopped at the church gate and the man did not notice us. Just as he was passing he took a big puff of his spliff to hear the 'chipmunk voices' in unison saying, "I see you Mr Val! You promised that you would stop smoking." Today Mr Val is a Christian and has never forgotten the incident which helped him to stop smoking."

It was at that tender age also, during family worship, that it was revealed the girls could sing with knowledge of notes and singing in parts.

According to daughter, Mahari, the trio has ministered in almost all the parishes in the country including major functions locally. They include Festival of Religious Freedom at the National Arena and internationally, the General Conference Session of the SDA church in San Antonio, Texas, (July, 2015), Florida, Georgia, and South Carolina.

"We were also invited to Tanzania in Africa, Connecticut, and New York in December. We sing in various denominations, functions, patients' bedside in the hospital, and anywhere God sends us," chimed daughter Malaika.

With some days beginning from as early as three in the morning and involve them making several appointments around the country and still handling house matters, the Fosters would trade nothing for the lives of service to God and man.

"God has blessed our ministry so that people of different ages, races, denominations, religions, and languages have been drawn to our music. We have had the experience where French-speaking, Spanish-speaking (persons), Chinese, and German, who knew very little English purchased our CDs, because they saw us on YouTube and Facebook," ended Mowgli.