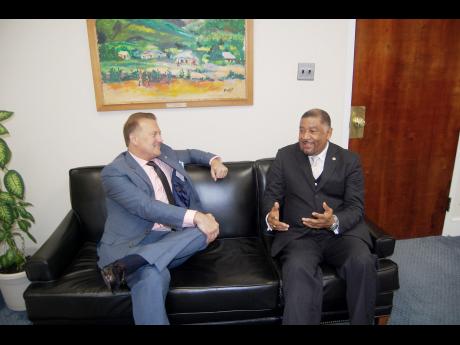 With focus on the energy, tourism and the business process outsourcing sectors, American Chamber of Commerce (AMCHAM) President Ron McKay met with Jamaica's new ambassador to the United States, Ralph Thomas, at the embassy in Washington DC recently. This makes AMCHAM the first Jamaica-based private sector grouping to meet with the ambassador.

McKay spoke to Ambassador Thomas about better connecting the Jamaican diaspora, especially in states with higher concentrations of Jamaicans including New York, Georgia and Florida with key American leaders at the congressional, state and county level as a means of coordinating effective trade missions between those areas and Jamaica. He noted that at the state and county level, there are little restrictions on engagement with foreign countries like Jamaica thereby opening the door for procurement opportunities and enhancing job creation and investment.

Mckay met with Ambassador Thomas while participating in the Association of American Chambers of Commerce in Latin America 48th annual meeting and 'Forecast on Latin America and the Caribbean' conference. The conference brings together a "who's who" of business in the Americas and is held at the headquarters of the US Chamber of Commerce in Washington DC.

Ambassador Thomas noted his seriousness about advancing Jamaica's development, and welcomed the hand of partnership extended by McKay. He noted the importance of working with the diaspora and American investors, several of whom own vacation homes in Jamaica, to boost investment in the country.