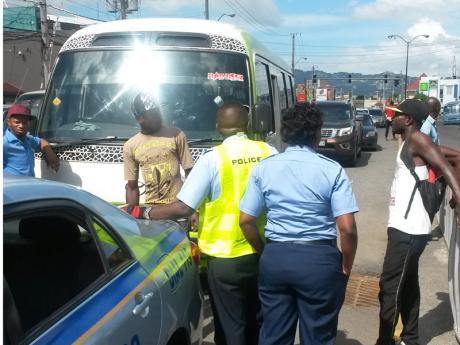 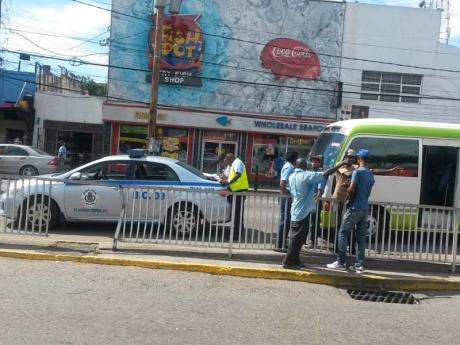 Jovan Johnson
Bus operators and conductors engage a female district constable while her colleagues write tickets for the bus driver. 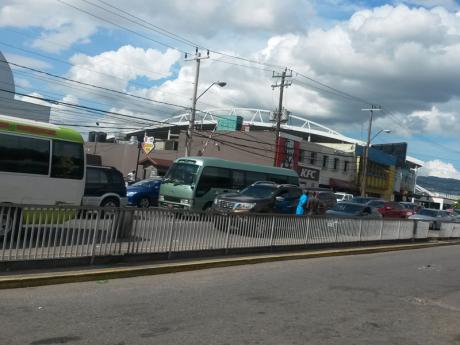 Traffic backs up along Constant Spring Road as the police prosecute a motorist who had stopped outside the designated area to pick up passengers.
1
2
3

A policewoman and a Coaster bus conductor almost came to blows in Half-Way Tree, St Andrew earlier today sending some passengers scurrying and causing a pile up of traffic.

The cop was part of a team attached to the St Andrew Central Police which pulled up on the Coaster bus for stopping to pick up passengers outside the designated area in the St Andrew capital.

On seeing the cops, the bus driver attempted to leave, but the police used their car to force him to come to stop.

The female cop then demanded the driver's documents. The driver complied but as some passengers were disembarking, the upset conductor went outside and uttered expletives at the female cop who was talking with the driver.

"Yuh fi go weh, weh yuh did deh when di tief dem just grab weh di people dem bag?", he questioned, in reference to an earlier incident in which a passenger at a bus stop was reportedly attacked by a robber.

"A nuh dat, try something", the cop responded, while loudly asking the conductor if it was right to be picking up passengers on the busy roadway.

The argument continued until the conductor walked up to the cop, threatening to hit her and declaring: "mi ready fi guh a jail".

Some other bus operators who were on the scene intervened and asked the conductor to "cool down", as two other members of the police team encircled their female colleague. Passengers who were in the Coaster bus and passers-by hastily left the scene.

Some calm was eventually brought to situation as the irate conductor disappeared and the policewoman issued a ticket to the driver for various violations including the absence of a fire extinguisher and picking up a passenger outside of the designated area.

The incident contributed to a traffic pile-up, delaying a wailing ambulance for at least three minutes.

The policewoman declined to speak with The Gleaner.