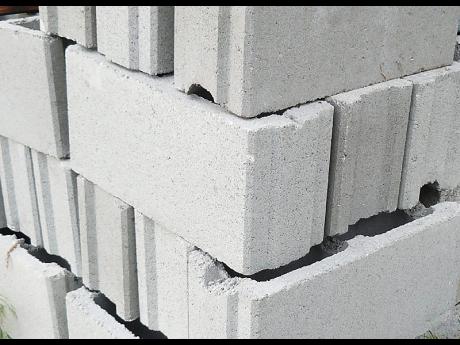 The high percentage of very poor-quality building blocks now on the market has triggered a range of responses from the Bureau of Standards Jamaica (BSJ), including the establishment of an in-house construction department to monitor and regulate in a structured way, output from the block-making industry.

"That department will be the one focused on testing because it is so important now that we went ahead and created a whole new thing, and a specific focus and special focus will be given to testing of blocks; so we are out there every day now, testing blocks," Garfield Dixon, marketing manager of the BSJ, told The Gleaner last week.

This follows last Wednesday's revelation by the BSJ that on average, as many as seven out of every 10 hollow concrete blocks it tested had failed to meet the minimum required standard.

But these figures do not tell the full story of just how poor the quality of blocks being used in building construction is.

The local industry uses eight-inch, six-inch and four-inch blocks, and respecting to questions specifically about the six-inch block, Orine Henry, director of the regulatory division, BSJ, told The Gleaner via email on Thursday: "The blocks are failing the compressive-strength test. The minimum for strength test is 7 Mega Pascal (mpa) (1000psi), and the blocks that failed were below the 7mpa. The average compressive-strength tests for the blocks that failed is 3.4mpa."

And the mains reasons identified by scientists at the BSJ for the failure of the blocks are as follows:

- Improper curing methods (blocks not kept shaded after and kept moist after the first 24 hours);

- High percentage of water added to the cement and aggregate mixture;

- Malfunctioning of machine used for the melding of the block (machine not compacting properly);

The disturbing findings came out of the testing of 234 block samples from 209 block makers across the islands by the Bureau.

In directing customers to only buy from registered block makers/suppliers, the BSJ marketing managing admitted that while there are more than 300 block makers on its database, only 65 are registered by the Bureau. This means that less than a quarter of the block makers on record are meeting the minimum standard.

tered block makers. Go online to www.bsj.org.jm and look on that list, and we encourage to only purchase blocks from persons on that list," is his advice to consumers.