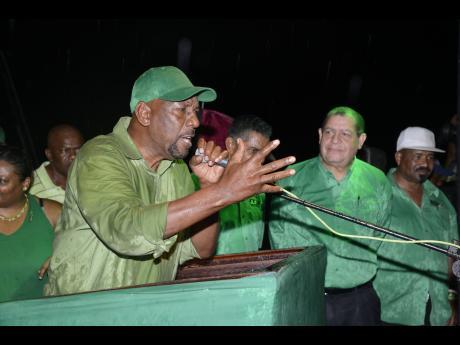 Gladstone Taylor Photo
Nothing that Monymusk Sugar Estate has just laid off 289 workers, Spencer, a trade unionist today argued that the Government must urgently make investments in the area.

Member of Parliament for South East Clarendon, Ruddy Spencer, is calling for an urgent economic intervention in Lionel Town, in the parish, which he said is about to see “the worst days of its life”.

Nothing that Monymusk Sugar Estate has just laid off 289 workers, Spencer, a trade unionist today argued that the Government must urgently make investments in the area.

Spencer said if the JLP is elected, it will create job opportunities for people in the constituency.

“We are going to rebuild the Free Zone so that you can get work once more,” he said adding that the closure of the tax-free production zone in Hayes had led to massive disruption.

Spencer, who is defending a slender 107 margin in the constituency, told JLP supporters to give him a fourth term as MP as much of the challenges in road infrastructure and other areas in the constituency was a result of political victimisation by the PNP.

“I feel your pain, I know your pain,” Spencer said as he defended his stewardship as MP.

As the MP spoke, the heavens opened up and threatened to put a damper on the mass meeting that was taking place.

“We have called on shower, we have experienced it, showers of blessing for the Jamaica Labour Party,” Spencer said as raindrops fell from the sky, sending people scurrying for cover.

Despite the downpour, the JLP supporters appeared to cling to every word that came from the mouths of the speakers and appeared electrified when Spencer declared that he would not be beaten by the PNP’s Patricia Duncan Sutherland.

He said that based on the way he saw people coming out from the various communities in the constituency to show support for his candidacy, he is certain that victory is nigh for the JLP in South East Clarendon.