Blind man wants to see back of James Robertson 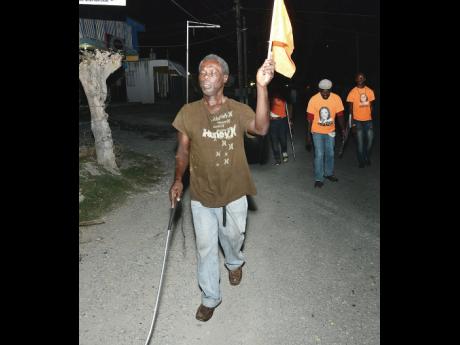 Ian Allen
Joseph Burger at the blind Comrade who wants to see the back of James Robertson.

Having given party supporters in West St Thomas the charge to go out and win the seat for the People's National Party (PNP), the comrades left Yallahs Square fired up and seemed in a hurry to get back home.

Among them was Joseph Burger, a blind man, who used his white cane to search through the darkness even as he evaded vehicles parked on the sides of the road and the many persons who around him who seemed oblivious about his disability.

The PNP is seeking to wrestle West St Thomas from the clutches of the Jamaica Labour Party?s (JLP) James Roberston, who has been member of parliament (MP) since 2002.

On Tuesday, the party nominated Marsha Francis to challenge Robertson in the February 25 general election.

Burger believes that he can play a part in the outcome of the elections, and he is even more motivated because his cousin is the PNP standard bearer.

"I love the policies of the People's National Party from Michael Manley days. I am the one who writes and process Mrs Portia Simpson Miller," he told The Gleaner.

By writing and processing, Burger explains that he often sends letters to the editor of this newspaper and has been seeking the opportunity to go on television to speak about the PNP.

"The PNP have to win because PNP is dealing with progress. I am confident and I want to do a lot of writing for the party. I well want an interview on TV," the PNP supporter said.

Burger is from Baptist in Yallahs, the same district which Anthony Hylton, the industry and commerce minister, was raised.

Hylton, who was appearing on a political platform for the first time since losing to Robertson in 2002, said he is prepared to return to the parish and campaign alongside Francis.

"If you are ready, I am prepared to come back out here and walk with you again so that we can make 1993 happen all over again," Hylton said.

When he was elected in 1993 over the JLP's Errol Anderson, it was the first time since 1976 that West St Thomas had voted for a PNP as its MP.

"There is a natural mystic flowing through the air. It reminds me of 1993 when they thought the people of St Thomas couldn't overthrow the yoke that was imposed upon them for several decades, but we did," said Hylton, who served two terms as MP in the eastern parish.

"The time has come for you once again to throw off the yoke of bondage that has been placed upon you for the last 14 years," he added.

Simpson Miller, told Francis that if she does her work properly, she will be elected.

"We have a decent representative in the person of Marsha Francis Johnson, so organise and organise. Send her to Gordon House," Simpson Miller said.

"Comrade Marsha, I am here to tell you that if you do your work, on election night, everything is going to be alright," she added.