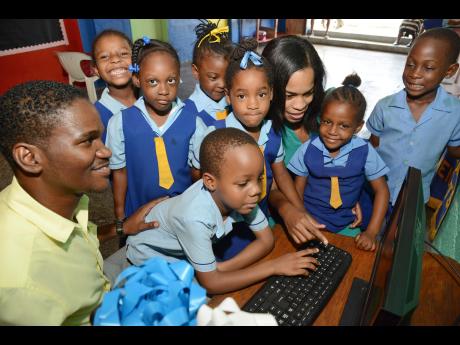 For the first time in Jamaica, some children at the early-childhood level will be introduced to the Self-Organised Learning Environment (SOLE), which will see them connecting with other toddlers worldwide in a bid to enhance exposure and develop cognitive skills.

Rondeen McLean, founder of the Literary Genius Foundation which will be implementing the programme, bemoaned the fact that the best schools in Jamaica do not exist where they are needed most, neither can the best teachers be found where they are most needed.

However, she said that SOLE, through a programme called School in the Cloud, would help to close the gap at the early-childhood education level in Jamaica by bringing additional expertise to underserved schools.

"It is a first for Jamaica. I must commend the various stakeholders for trying to include technology within the school system. However, with this programme, children (will) experience a different culture, getting to see what life and the school environment is like in another culture. It's guided but exploratory at the same time," she told The Gleaner.

"It's part of the global experiment being led by international experts, so what we are trying to do is to be forward-thinking, developing a classroom so to speak, to the soundcloud computing platform. It's bringing into play a lot of new technology that we needed, new thought processes that will be needed for these young impressionable children," McLean said.

Noting that the pilot would begin at the Shalom Pre-School in August Town, St Andrew, she said there was need for technological innovation within Jamaica's early-childhood education sector.

"When we are done with this, we are forecasting a room with four computer terminals, with five children per terminal and they are left on their own. They won't be able to wander off on to sites that are not appropriate for them. It's just children learning by play while connecting with other children worldwide," she declared.

"We've already exchanged with the school in the cloud project what the curriculum requirements are here in Jamaica, and they have a team of volunteers who are actually reviewing the curriculum. We are going to have learning outcomes and requirements, but again, the emphasis is on learning through play," McLean said.

"I'm a big proponent of education and I love children as well. What we are trying to do, is to do our part as early as possible. Persons might try to address the problem at the Grade Six Achievement Test level or when we find that boys are lagging behind. I believe it makes perfect sense that we start at the early-childhood level."