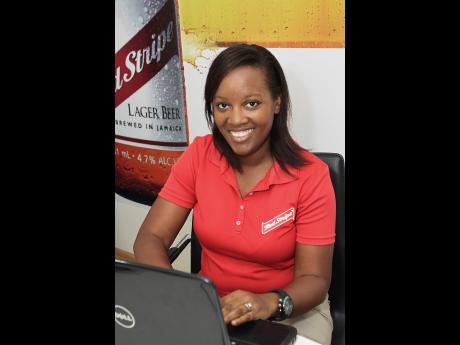 With more and more women taking the lead in major companies in Jamaica and the world, Red Stripe remains a consistent standard-bearer, with Cavelle Francis-Rhiney running its high-profile Project Grow programme.

Perhaps one of the few females in her field, Francis-Rhiney has an academic background in sustainable development with a focus on food security, climate change and supply chain development. The PhD candidate also holds bachelor's and master's degrees.

In January, she was invited to participate in the Dialogue 4 Development (D4D) Forum, hosted by the Caribbean Community (CARICOM) secretariat as part of the activities under the Agriculture Policy Programme (APP).

Giving her take on the forum, Francis-Rhiney said she, "Was specifically invited to participate in a validation workshop for a consultancy that was done to elaborate a regional public policy framework for the cassava industry in the Caribbean, among other critical issues. It was a rewarding experience and added to the impetus for me to play my part in ensuring that what Red Stripe is doing is an absolute success. The Caribbean is watching and this project will very likely influence developments throughout the region.''

Red Stripe's Project Grow is a sustainable agriculture strategy to increase use of local raw materials, particularly cassava, in its brewed products with a target of 40 per cent by 2020. It currently uses five per five per cent of cassava starch in its Red Stripe brew, which the company grows on farms in St Catherine.

The main objective of project grow is to develop a sustainable cassava starch supply chain with some 3,000 acres of cassava under cultivation and agro processing capacity of 100 root tons/day to convert cassava roots to starch and eventually high maltose syrup (HMS) thus replacing imported high maltose corn syrup (HMCS) in brewing with cassava starch up to 40 per cent of extract.

Since its inception in 2014, Project Grow has also provided the training and employment of nearly 70 youths, the installation of a cassava starch processing plant in Jamaica, and the development and cultivation of cassava tubers under commercial conditions on Red Stripe owned farms.

With Francis-Rhiney playing a key role in orchestrating these achievements and, as a leader in the Project Grow initiative, Red Stripe is poised to achieve even more in the coming months.