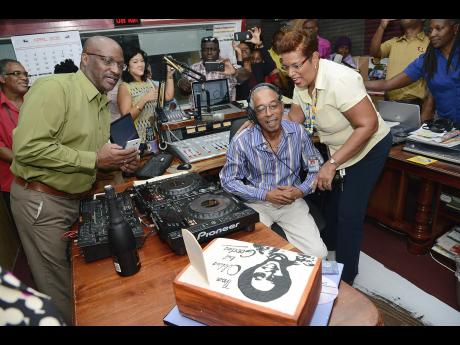 Rudolph Brown
From left-right, foreground: Francois St. Juste congratulates veteran broadcaster Allan Magnus on his 45th anniversary at RJR while his dear friend and co-host Dorraine Samuels guides his attention to the celebratory cake. Behind them are several members of the RJR family who joined in the festivities. 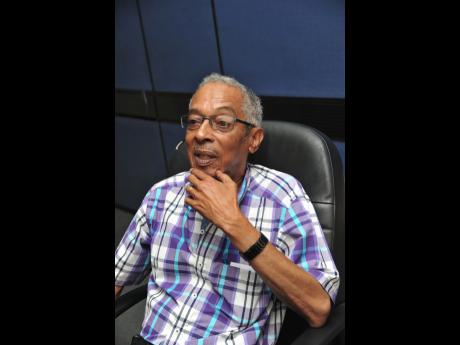 Norman Grindley
Allan Magnus tells how it was when he started at RJR 45 years ago.
1
2

Regular listeners to RJR's Jamaican Morning with Allan Magnus would have heard many references to his late mother. She has left a lasting impression on his life, especially the value of money.

"At an early age I learnt from my mother to be fiscally responsible," Magnus said with candor. In addition to her full-time teaching job, she also gave private lessons to supplement her income.

He continued, "When she got her pay cheque, she gave it to me with a list of all her bills to be paid after I cashed it. I paid all the bills downtown Kingston then carefully took the change home where we both counted what was left against all the receipts I got," he said.

"I also learnt the importance of saving from her. My school fee for Kingston College was seven pounds five shillings but she saved enough from her pay for that as well as to pay down on our house in Pembroke Hall," Magnus said.

The witty radio announcer also recalled some pleasant memories of his father, especially when they were residents of the Rockfort area of the city.

"My father drove a tanker for Shell and one of my fondest memories of him was when he took me to work with him at the airport. I enjoyed being in the tanker and going under the plane with him." He noted that his father was not as good with money as his mom but he had his very good qualities as a child, he also took them for rides in the country with him. Magnus said his father had both good and bad qualities but he has tried not to emulate the negative ones.

Professionally, Magnus is not very impressed with many of today's crop of on-air announcers and presenters. He told The Gleaner that many of them should be paying the stations where they work for their time on air rather than the other way around. "We had strict rules when I started out; chief among them is that you should never abandon the studio.

"When I started, we had to first learn to pronounce words properly, and know which songs were appropriate for different times of the day and a lot more. Today you are hired and put on the air right away, said Magnus, noting how times have changed.

Over Magnus' 45 years in the business, there has been one constant. The low salaries paid to media practitioners, so he like other announcers had to have a second job. His was a photo identification card business that was among the first in the island. During those years, his hours were brutal, he would leave work at 9 a.m. and go directly to his business, but the sacrifice was necessary and he learnt to manage his time. This gruelling schedule forced Magnus to survive on four hours' sleep.

There have been scores of outside broadcasts but Magnus says his most memorable assignment in the 45 years was the trip to Germany where he did the morning show for three days with limited facilities - successfully.

His biggest surprise was learning that the job was not a scripted one. "I asked the then programmes manager Winston Ridgard if you had to plan what you said on air and he told me it was all off the top of your head. The skill is in your ability to 'bite your tongue at the right time'.

Another Magnus fact is that his favourite radio disc jock is the infamous American Don Imus who fell from grace for his unkind remarks about some female sports personalities. Magnus grew to like his morning show after his aunt who lives in the United States encouraged him to listen to Imus.

Interestingly Magnus, when asked, admitted that he would find it difficult to listen to his successor when he eventually signs off permanently. "It would be difficult for me to listen; I would be too critical to be fair to who took over, so I would just not turn on my radio," he said.

Would he change anything in the 45 years if he got the chance to do it over? "I would not change a thing; everything has contributed to what I am now. My relationship with the company is good thanks to Ridgard who risked it all for me. Looking back, he must have put his job on the line for me and I appreciate him," said the reflective Magnus.

His word of advice to upcoming radio announcers is to stay relevant and have an opinion on everything."