Charles Dufour honoured in the US 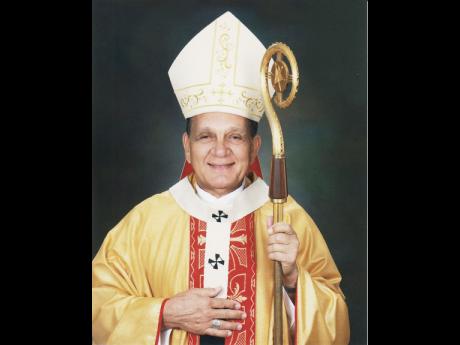 Archbishop Emeritus of Kingston Charles Dufour was among a group of world faith leaders honoured last Saturday at an awards gala held in Maryland, United States.

The event marked the culmination of the third international Caribbean and African Faith-Based Leadership Conference (CAFBLC), which drew faith-based leaders from the US, Africa, and the Caribbean. Among the honourees was Bishop Wellesley Blair of the New Testament Church of God in Jamaica and the Cayman Islands.

Dufour was cited for his "outstanding leadership,

ministry and humanitarian services" to Jamaica. He was also praised for his "holistic human empowerment".

Governor of the state of Maryland, Lawrence Hogan, Jr issued a citation recognising and commending the honourees for the work they do in their respective communities. The governor's citation was presented on behalf of the governor by the chairman of the Governor's Commission on Caribbean Affairs, Ambassador Curtis Ward, former ambassador of Jamaica to the United Nations (Security Council Affairs). Rev Dr Agorom Dike, president of the CAFBLC, accepted the governor's citation on behalf of the honourees. Ward also presented the governor's proclamation declaring June 2016 as Caribbean American Heritage Month in the state of Maryland.

The stated objective of the conference was "to empower Caribbean and African leaders to facilitate economic empowerment and foster high ethical values in communities" served by the faith-based leaders. Honourees were selected for their work uplifting communities in their respective countries. The conference, which ran from June 19-24, was launched at a gospel concert in Washington, DC at which Jamaican gospel singer Marion Hall (formerly known as Lady Saw) was among the entertainers. Hall also treated the gala attendees to two of her gospel songs.