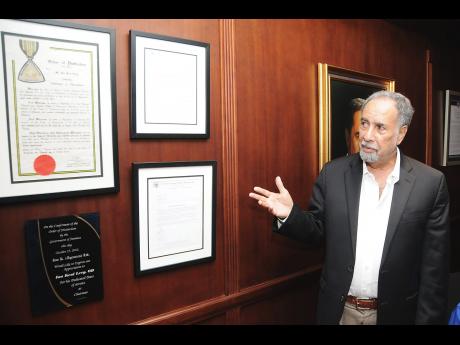 Jermaine Barnaby
Businessman Ian Levy views some of the awards he's collected throughout his career. On Heroes' Day, Levy will receive the Order of Distinction in the rank of Commander. 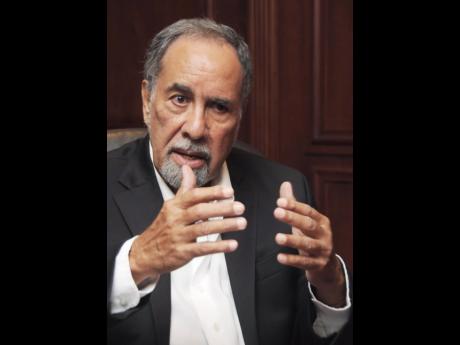 Jermaine Barnaby
Aside from his contribution to society as a businessman, Levy has also given much of his life to philanthropic endeavours.
1
2

Several outstanding members of the Jamaican business community are among this year's list of persons who made the National Honours and Awards list. They have sacrificed blood, sweat and even tears in their quest to contribute to the growth and development of Jamaica in its 54 years of Independence. As we eagerly anticipate the upcoming ceremony on National Heroes Day in October, when they will be presented with their awards, we will bring you features on some of these illustrious sons' or daughters' achievements. Today, we feature Ian Kent Levy, who will receive the Order of Distinction for his contribution to the business sector.

If you've ever used any French products over the years, you might want to thank Ian Levy.

As the managing director of Ian K. (Agencies) Ltd, he mostly represents French companies, doing large contracts between those companies and the Government of Jamaica.

"When I started to do business with France in 1978, the only thing we imported was a few Peugeot, wine, and perfumes," he said. "We represented roughly 31 of the largest French companies in Jamaica and, through our business relationship, that's why these companies are here. Because of what happened in Jamaica, that same model was sent to other countries in Central and South America. French trade developed massively in the region."

It's no surprise that Levy received one of the highest national awards the French government can bestow on a non-national, the Chevalier de I'Ordre National du Merite' in 2005.

"Nothing that I've got here I asked for," he said. "So every single one means something because it's a simple way of saying 'thanks' and 'we appreciate what you've done'." Levy is a partner in numerous companies, but, for some, he is best known for establishing (with Paul Hoo and the late Peter Stewart) Supreme Ventures Limited, the island's top gaming company.

"We saw that the Jamaica Lottery Company was doing about $3 billion per year, but we figured the lottery was worth $10 billion, and we got the licence to operate Cash Pot," he said. "Needless to say, the rest is history. After two years, we did exactly what we said we would do."

Levy has also devoted a huge portion of his life to giving back. Among his efforts, he founded Cornerstone Ministries (which provides training and counselling to inmates) and he also provides full support to nearly 12 children in Kingston, as part of the Child Find Project.

"I'm a Christian and I believe that it's more blessed to give than to receive," he said. I've done very well in life, but I could equally have been very poor. I didn't go to university and I don't think I have any special talent. I believe the Lord has blessed me and He has because somehow He saw that I would share some of this blessing."

And Levy has no intention of retiring. He is still dreaming up and working on significant projects. He thinks it's his duty to keep going as "the more I can make, is the more I can share".