Street Forrest thanks support base for national award 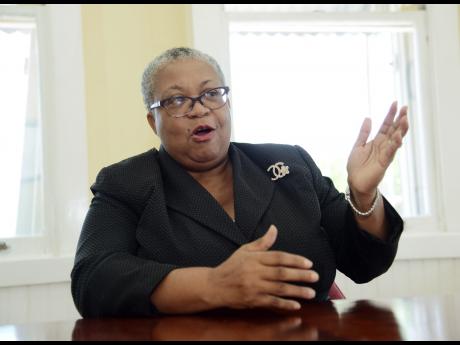 Gladstone Taylor
Marlene Street Forrest, general manager of the Jamaica Stock Exchange, explains some of the positive changes she and her team have made.

Talk about the stock market and trading, and some people will shy away faster than being called to sing karaoke.

But one person who knows the Jamaica Stock Exchange (JSE) inside out is Marlene Street Forrest, the current general manager. Under her stewardship, the JSE has seen tremendous growth, including the birth and continuing success of its junior market. Street Forrest revealed that she was very passionate about it from its inception.

"We were not getting the listings on the main market, but if you looked around, there were so many small and medium-size companies that we thought we could attract," she said. "It has created a lot of buzz and you can see how the companies on the market have performed to foster economic growth. When you look at the returns for investors, that is what you want because it has the multiplier effect, including more jobs."

In 2015, the JSE was acclaimed the number one performing stock exchange in the world by Bloomberg. For outstanding leadership of the JSE, Street Forrest will be presented with the Order of Distinction in the rank of Commander.

"It is an honour and these awards are not to be taken lightly," she said, while praising the support of her staff, the JSE board and her family and friends. "And in it all, I must tell you it is important to trust in God." Street Forrest did not envision this when she joined the JSE in September 2000 as deputy general manager.

"I liked the idea of the market. And I just believe that wherever the opportunity presents itself, I would be able to do a good job," she said, admitting that despite her masters in business administration and bachelors in management, she really learnt the business "when you come to the job and see exactly how the market really works".

"I thought that the market was bigger and I thought we had reached further in comparison to the global markets," she said. "But that was a positive within itself because, obviously, there was much to do. We had just started the electronic trading platform ... so there were so many possibilities." She has been general manager for over 10 years.

"It was different (taking over) because now the buck stops with you," she said. "But you were given a chance to shine. You have to also ensure that the confidence they had placed in you materialised. Plus, the things that you thought you wanted to do, you can now do." She lauded the staff for their support.

"Especially the management team. You can say they were the wind beneath my wings. Apart from outside with your friends and family supporting you, they (the management team) were interested in ensuring that I did not fail. And they also wanted to see the success of the stock exchange."

Also during her tenure, Street Forrest established the Stock Market Game for high schools, the Best Practices Awards for companies and the Broker Analysts Competition, among other efforts.