Jamaican author gets Honorary Doctor of Letters in the UK 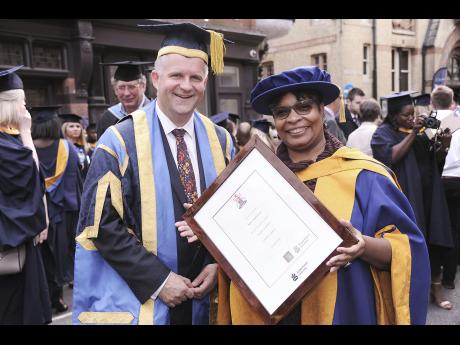 Born in Kingston, Jamaica, Nalo is Professor of Creative Writing at the University of California, Riverside, in the United States, and valued mentor to several of Anglia Ruskin's Creative Writing students.

Nalo's first book, Brown Girl in the Ring, won the Locus Award for Best First Novel, and was a finalist in the 'Battle of the Books' television show, Canada Reads.

In 1999, Nalo received the Ontario Arts Council Foundation Award for Emerging Writers, and she was the recipient of the John W. Campbell Award for Best New Writer.

Her second novel, Midnight Robber, published in 2000, was nominated for the Hugo Award for Best Novel. And her 2001 novel, Skin Folk, won the World Fantasy Award and the Sunburst Award for Canadian Literature of the Fantastic.

She will be guest of honour at the 2017 World Science Fiction Convention, the highest accolade that the science fiction field has to offer.

Professor Martin said: "Throughout her career, Professor Hopkinson has been notable for the outstanding ways in which she has supported other writers and artists. She has worked in libraries, been employed as a government culture research officer, and served as grants officer at the Toronto Arts Council.

"Our university already enjoys close links with Professor Hopkinson. She has mentored many of our creative writing students, and she has said she will be delighted to support students on our new MA in Science Fiction and Fantasy."

He added, "Nalo's passionate and insightful commitment to the literary exploration of issues such as race, class and sexuality, exemplify the focus, determination and talent required to excel at the highest level."