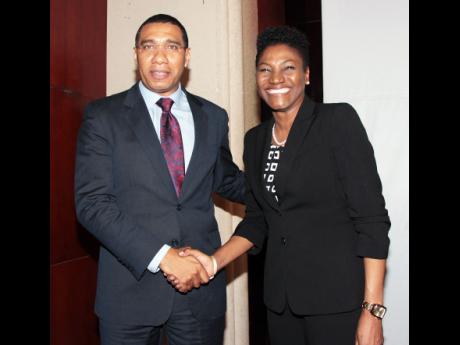 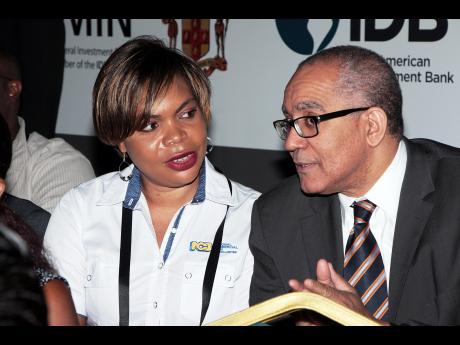 Contributed
Governor of the Bank of Jamaica, Bryan Wynter, and Keisha Demetrius, business banker with the National Commercial Bank, discuss banking and finance-related matters, during their attendance at the Foromic three-day conference held at the Montego Bay Convention Centre, recently. NCB was the diamond sponsor.
1
2

Senior general manager for retail banking at the National Commercial Bank (NCB), Audrey Tugwell-Henry, said it was a blessing for Jamaica to have been

chosen to host the Foromic Conference.

She predicts that there will be significant benefits to be seized by micro, small and micro enterprises (MSMEs) in Jamaica in the medium-to long-term period.

"Foromic gave us a tremendous opportunity to showcase Jamaica and its positiveness to include a stable democracy, an open economy, a strong financial network that is robustly regulated and a strong relationship with the International Monetary Fund," Tugwell-Henry affirmed.

Foromic is considered the most important annual event to be held in Latin America and the Caribbean, which addresses microfinance, entrepreneurship, financial inclusion and development of micro, small and microfinance enterprises within the region.

Established in 1998, the Multilateral Investment Fund , a member of the Inter American Development Bank (IDB) has staged conferences in Latin America annually for the past 18 years. Jamaica was hosting the conference for the first time in its history.

"We see it as an avenue to let other countries within the region be aware of the potentials and the networking opportunities that exist in Jamaica.

We also see it as an opportunity to explore opportunities, which MSMEs in Jamaica and the region can benefit from," Tugwell-Henry added.

Tugwell-Henry said that for decades, NCB had built a firm reputation of being a huge supporter of MSMEs and to demonstrate their commitment to being a part of the development and growth of the MSME sector in Jamaica, NCB has built a unit dedicated to achieving this objective.

To have earned the title as diamond sponsor of the Foromic conference did not come cheaply for NCB, who sees it as not an expense, but a prudent investment for MSMEs and Jamaica as a whole.

On the corporate circuit