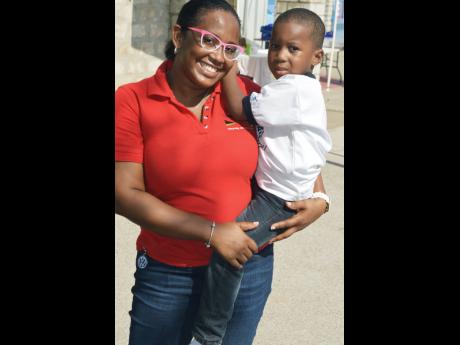 Contributed
Tanketa Chance-Wilson, general manager of the Grace and Staff Community Development Foundation, cheers up this youngster from the Lalyce Gray Basic School during a treat at the Breezy Castle Mini Stadium. 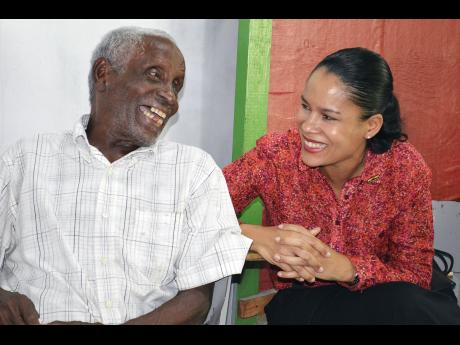 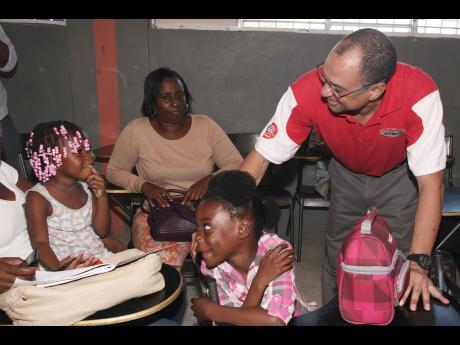 Contributed
GraceKennedy's CEO Don Wheby (right) gets shy smiles from these children as he shares a joke. 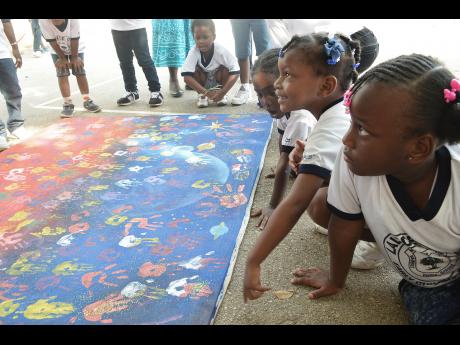 Contributed
These students from the Lalyce Gray Basic School admire their handiwork at their fun day at the Breezy Castle Mini Stadium.
1
2
3
4

In the two weeks leading up to today, GraceKennedy has been carrying on an almost 35-year tradition of giving.

Every year during this season, GraceKennedy, through the Grace and Staff Community Development Foundation, spreads Christmas cheer to more than 1,000 senior citizens and children across Kingston, St Andrew and St Catherine.

According to general manager of the foundation, Tanketa Chance-Wilson, it is part of the company's DNA to do what is good for the country, which is why GraceKennedy tries to support communities in a meaningful way.

"We always encourage them to share with their neighbours and family members so the number (of persons reached) goes well beyond just about a thousand," added Chance-Wilson.

The items given out this year totalled one week's supply of staples produced or distributed by the food and financial services conglomerate.

This year, starting on December 6 and ending on December 20, residents of Quarry Hill, Lakes Pen and De la Vega City in Spanish Town, St Catherine, were treated as part of the GraceKennedy outreach.

Additionally, children from the Lalyce Gray Basic School based in Cassava Piece, St Andrew, and the St Michael Basic School in Rae Town, Kingston, were treated by members of staff of GraceKennedy, supported by volunteers from the communities and the National Youth Service.

CEO of GraceKennedy Don Wehby was among the volunteers at the De la Vega Community Centre on December 12.

"It is a privilege to give back and I'm happy to spend time with the residents in this way. Our relationship with these communities is deep as they are located close to one of our factories or offices.

"Many of our staff members are from the communities and have helped to build GraceKennedy, so it's a privilege to give back and help ensure that they have something for themselves and to share with others at Christmas," said Wehby.

For the past 13 years, Parade Gardens resident Lorna Blake has been a community volunteer and one of the main organisers for the outreach in that community.

She says the residents of the central Kingston-based inner- city community express an indescribable gratitude and appreciation to GraceKennedy for its thoughtfulness.

"I know they appreciate it, they look forward to Grace every year," said Blake. "I can't explain the feeling. They get it (the outreach) once a year and when they get it, it's like they get the world. Even when I pass them on the road after, I still get a thank you."

Sampars Cash and Carry, based in Kingston, and the C.B. Facey Foundation contributed meaningfully to the outreach.

GraceKennedy, through its foundation, also supports some 500 students up to the tertiary level through educational bursaries, mentorship programmes and six educational development homework centres.

Grace and staff operate a science, technology engineering and math centre in Parade Gardens, to improve performance of early childhood, primary and secondary-level students in math and the sciences. A music programme was recently added following donations of instruments by the Bob Marley Foundation.