Diary of a Ghetto Priest | From the prisoners:'Happy New Year!' 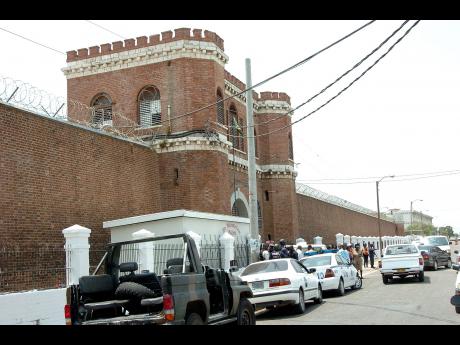 It's been well over 30 years that Missionaries of the Poor has been going to the prisons. Our Brothers look forward to it; it is mandated by the life of Christ and his commands. "I have come to preach good news to the poor, to set the prisoners free." This year, we visited the women's prisons at Fort Augusta, South Camp Road Rehabilitation for girls and General Penitentiary.

The Brothers are welcomed by the authorities, and the inmates are full of joy. Why did the Lord stress the need to love and serve the poorest of people and the prisoners? The poorest of people are totally deprived of any worldly care or opportunities, and in their deprivation, they cry out to God and humbly seek the mercy of God! Spiritually, they are often rich in their need of the Almighty, and they are the meekest and most childlike of people; unlike the rich, who don't need anything from the Lord.

The prisoners, on the other hand, are often the worst of sinners. They have killed, robbed, raped, stolen, taken drugs, excessive liquor, got angry to the point of violence. They are incarcerated, condemned by society and marked as unwanted by their families, friends and neighbours. They are the scum of the earth. Yet, the Lord says we must set the captives free, visit them and bring good news to them.

They were deeply moved when they saw the 15 volunteers and 10 Brothers drive in with the trucks of food, gifts, prizes, our Bibles and crucifixes and musical instruments; and they were also taken back by the handshakes and hugs, and even embraces we offered to the men, some who had been there for 30 or 40. years others had been there for just one or two years.

We gathered in the hall used for chapel, meetings, and study groups, or just for celebrations. The smiles and greetings and happy New Year wishes still ring in our ears. We did not think of them as prisoners but rather, as God's children.

How deeply touched we were when they engaged in dance, foot in the hall, lime and spoon races and bullfrog races. There was rollicking laughter, sometimes to the point of tears. Then we prayed. I told them, "Men you are not ready to get out of this prison, unless you are living out the Word of God; love your enemies, do good to those who hate you, pray for them. When men persecute, you pray for them; if someone slaps you, turn the other cheek.You must rejoice if all these things happen, for great is your reward in Heaven."

Hostility of the world

Then I told them that there is hostility in the world. "If you react when someone takes away your babymother, if you pull out a gun because you have been robbed, if you get into a fight because someone slaps you or fights you, or if someone shouts at you or call you terrible names and you don't control your temper, you should remain in prison, you are not ready for freedom. Soon you will be back in prison.

"You must learn to return a blessing to your worst enemy; then you are strong, then you would have learnt a lesson.

"Jesus is the Prince of peace, think of how Jesus hung on the cross, spat upon, mocked, laughed at, struck, speared, crowned with thorns. His only response was, 'Father, forgive them they know not what they do'.

"At this point they understood: the Prince of peace, Christ's wisdom. 'I give you peace which the world could not give'."

I pray for peace in our island. It is only faith in Christ that bring such peace. I pray that we will be a Christian nation, the foundation on which true and lasting peace can be built. "Blessed New Year!" yelled a prisoner as we left. "Tell them the prisoners are praying for them."