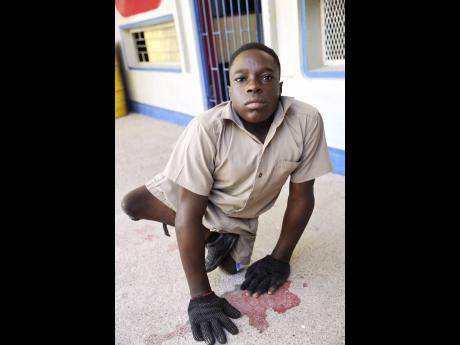 Norman Grindley
Fourteen-year-old André Coleman says he is not challenged by his disability. 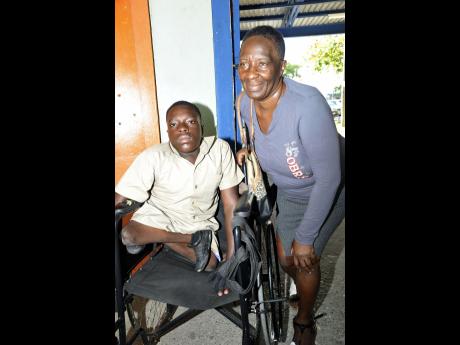 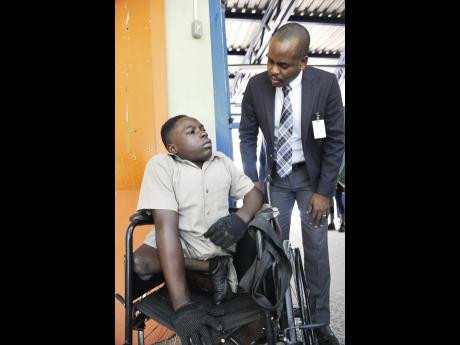 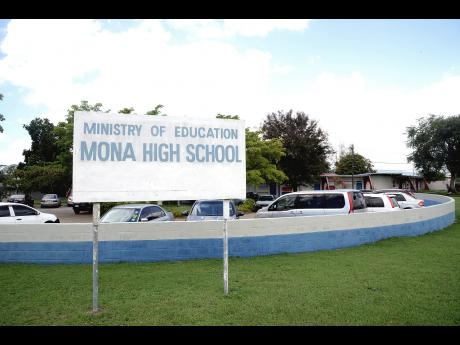 Andre Coleman is one of a number of students who have benefited from the disabled-friendly environment at Mona High School.

Fourteen-year-old Andre was born with the birth defect spina bifida due to his mother being diabetic. This resulted in both of his legs being bent under forcing him to move about on his hands.

Due to Andre's disability, he struggled to get into a primary school as, according to his mother, Hermine Coleman, the principal and the grade-one teacher were opposed to him enrolling, forcing the Ministry of Education to intervene.

When it was time for him to matriculate to high school, he was placed at Penwood High but the construct of the facility was not conducive to disabled students.

The education ministry once again stepped in and relocated Andre to the St Andrew-based Mona High School where he was welcomed with opened arms by students and teachers alike.

"The children love him," said the beaming mother.

"As far as I have heard, they spoil him. There is always somebody around to push him at lunchtime and in the evenings, they push him to the bus stop," added Coleman.

Principal of the school, Keven Jones, revealed that there is one particular fifth former who looks out for Andre daily, but the other six disabled students at the institution are also well taken care of by the school's population.

"The students do not discriminate. They welcome them," said Jones who has hired two additional members of staff to attend specifically to the needs of the disabled children.

"When I came here, I recognised that we didn't have an employee dedicated to caring specifically for children with physical disability," Jones told The Sunday Gleaner. "

Jones said while the disabled students are not treated with any type of bias or preference, extra effort is made where necessary to accommodate them.

"We have a young lady, who is in a wheelchair, but she is visually impaired, so what the teachers do is pass on the notes to the caregivers, for example those at Salvation Army, and they would make them into big prints and give her.

"And we give them extra time when doing teacher-made tests and exams and completing assignments because they don't work as fast as the other students," said the principal.

Built to accommodate the disabled

The physical infrastructure of the school also lends support to these disabled students, as the compound is flat, and head girl, Joe-lee Williams, theorises that the impression that the school was built to accommodate the disabled community has aided in the level of acceptance.

"Maybe because the students come in and see them, it is like they have literally been a part of the school since the school was made," said Williams.

"So it is just one regular school where everybody can get along fine. They'll rush to push them (disabled) to classes and back.

"They (disabled) also get along fine with the (other) students and are quite open. They don't see themselves too different from others. They laugh, they play with them and they even show them tricks on their wheelchairs," added Williams.

Andre says his favourite subject is Spanish and he wants to become an engineer. He is thankful for how most persons have treated him.

"I don't find anything that is challenging for me," said Andre, who enjoys playing football.

"I can do everything that anybody else can do; just that I can't walk on my feet."

Andre, however, wishes he had a computer at home and a second-hand car so that one of his brothers could take him to school. He currently has to leave home by 5:45 each morning and takes three buses to get from Olympic Gardens to the eastern St Andrew-based school.

"He takes one of the Hiace buses to Three Miles and then takes any of the Portmore buses up to Half-Way Tree and then a next bus to school," his mother explained.

But she noted that this is not a problem as: "There is always somebody willing to help him and carry his bags."