UPDATED: Food For The Poor accused of building termite-infested house, criticised by MPs 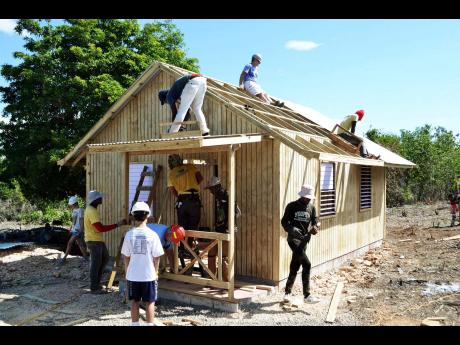 In this file photo volunteers and members of Food For The Poor Jamaica construct one of 18 houses donated to families in Portland Cottage, Clarendon.

Lawmakers this morning criticised Food For the Poor (FFP), Jamaica's largest charity organisation, over the building of low-income houses one of which reportedly had termites.

Members of Parliament's Infrastructure and Physical Development Committee also expressed frustration as they claimed that they were being sidelined in the implementation of the project.

To compound matters, the parliamentarians expressed disappointment with news that FFP is seeking to increase building costs and insisted that things have to change.

The housing project is an equal-funding partnership between Food For the Poor and the Government that was established in 2012 under the Jamaica Emergency Employment Programme (JEEP).

It expires this year.

With the change in government last year, the JEEP was replaced with HOPE which is located under the Ministry of Economic Growth and Job Creation in the Office of the Prime Minister.

HOPE officials appeared before the parliamentary committee today but were unable to explain how applications for the FFP houses currently being processed, were selected.

The Government pays half the cost to build each of the two-bedroom board houses but Food For the Poor is requesting an increase of US$800 that would be split in half.

The funding comes from the PetroCaribe Development Fund.

According to the project director in the Ministry, Lanford Chambers, the charity group said the increase is necessary because of a price hike from overseas suppliers.

He said the charity has been asked to submit more justification.

Government MP Leslie Campbell argued that the cost is too high and supported his opposition colleague Dr Fenton Ferguson who called for a review of the funding arrangements and a determination whether Jamaica is getting value for money.

Mikael Phillips, who chairs the committee, charged that there are also issues of quality as beneficiaries in his Manchester North Western constituency have complained about problems, including termites in one case and poor construction.

Fellow government MP Everald Warmington questioned why the project was continuing when, according to him, Prime Minister Andrew Holness ordered that it be suspended.

Warmington is state minister in the ministry and the project falls under his watch.

There was no representative of the charity group at the meeting and the MPs were adamant that they were not trying to discredit the organisation.

EDITOR'S NOTE: A previous version of this story incorrectly suggested that Mikael Phillips said the termite problem affected more than one house. In addition, Andrew Mahfood, chairman of Food For the Poor, has subsequently stated that he has received no such reports and that the boards used on homes are specially treated.