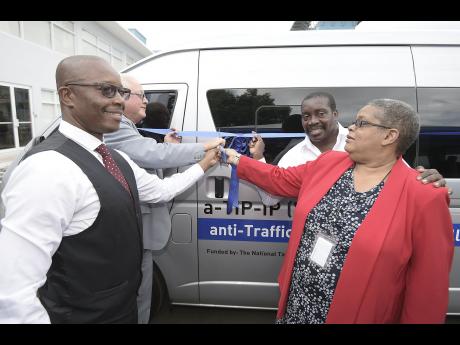 File
The new Toyota Hiace minibus that was donated to the anti-Trafficking in Persons Taskforce.

The Andrew Holness-led administration says it will be intensifying its public education against human trafficking this year.

According to Justice Minister Delroy Chuck, the campaign will be “more aggressive”, especially in rural areas where persons are deemed to be more at risk.

“We will also focus on targeted interventions for vulnerable groups,” he said.

Chuck was speaking at the handover of a bus to the anti-Trafficking in Persons (TIP) Unit of the Jamaica Constabulary Force (JCF) last week.

He urged Jamaicans to be on alert for signs of human trafficking.

“Pay more than the usual attention to children, who might be victims of forced begging; entities or individuals of dubious character, who are recruiting persons as models to work overseas or in massage parlours, nightclubs,” the justice minister advised.

Chuck noted that most of the victims of human trafficking are women and minors, and appealed to parents and guardians to talk with your children about how to make wise decisions and to protect themselves.

“It is disheartening to hear of reports of human trafficking, and in particular sexual slavery, where women, mostly young and oftentimes minors, are tricked into prostitution and even gang-raped,” he said, adding that the simple caution ‘don’t talk to strangers’ should also apply in the use of social media platforms.

“Do not give information about yourself and your family that can be used to harm you. Most importantly, do not agree to meet anyone whom you have met on social media,” he advised.

Chuck noted human trafficking takes a tremendous toll on the victims, noting that it takes years for them to recover from the mental and physical trauma.

“Sometimes they don’t, because of the horrific experiences associated with human trafficking,” he pointed out.

He said the Government is strengthening the support system for victims through the establishment of shelters and providing psychological support.

He also informed that the anti-TIP policy is expected to be completed this fiscal year and thanked the United Nations Development Programme (UNDP) for providing the necessary funding support for the six-month consultancy to develop the policy.

“This Government, the Ministry of National Security and other stakeholders collaboratively reject human trafficking as a violation of the fundamental rights to freedom and security of the person,” he said.

He urged all law-abiding citizens to use the Stay Alert App to anonymously report suspicious incidents.

The 16-seater Toyota Hiace provided to the TIP Unit will assist in the ongoing fight against human trafficking, and transport victims that have been rescued.