Customs agents get training in use of refrigerant identifier machines 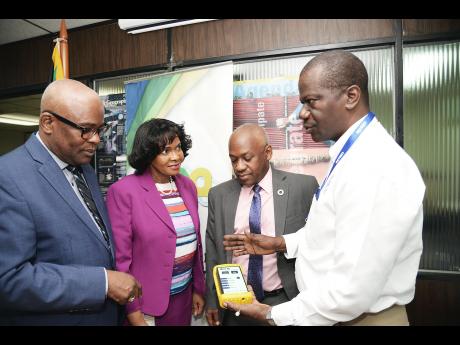 Twelve customs agents from Kingston and Montego Bay have been trained in the use of two recently acquired Refrigerant Identifier machines, which were procured through the hydro-chlorofluorocarbons (HCFCs) phase-out implementation project under the Montreal Protocol.

The machines were presented to Jamaica Customs by the National Environment and Planning Agency (NEPA) at the Caledonia Avenue offices yesterday in Kingston.

Under the protocol, Jamaica is committed to the reduction of harmful gases, some of which are common in air-conditioning and refrigeration units.

"Stage one will allow Jamaica to attain a strong 35 per cent phase-out of HCFCs by the year 2020. One of the components in this programme is the training of enforcement officers in ensuring compliance with the expended regulatory regime," said Vincent Sweeney, head, Caribbean subregional office, United Nations (UN) Environment.

The two units were sourced at a cost of $291,000 with the use of project funds from the UN Environment and will be donated to Jamaica Customs, according to project manager, Nicole Walker.

"The HCFC phase-out management plan, stage one project, was approved in July 2011 with the UN Environment named as the collaborating agency, with phase two set to begin immediately after the ending of phase one," she stated.

In the meantime, NEPA Chief Executive Officer Dr Peter Knight said that the machines will empower Jamaica Customs in the execution of its role in protecting the Jamaica's ports.

"Jamaica Customs is the primary custodian of the country's ports and it plays a critical role in the monitoring and control of Jamaica's borders to enforce legislation on trade in HCFCs and other ozone-depleting substances," Knight said.

The refrigerant identifiers will enable customs officers to screen ozone-depleting substances that are being imported into the country in a bid to reduce the risk of illegal trade in HCFCs.

Jamaica is a signatory to the Montreal Protocol on substances that deplete the ozone layer and is obligated to phase out all ozone-depleting substances, including hydro- chlorofluorocarbons, over a period of time.