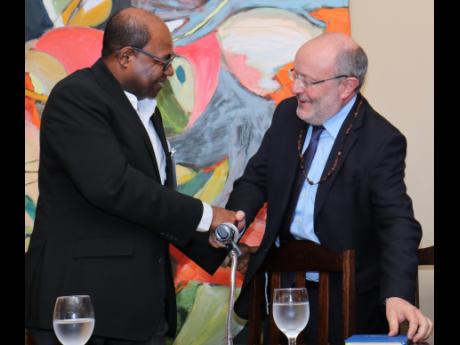 Tourism's retentive capacity is not being felt by the people aligned to the sector, causing concern to the island's minister of tourism, Edmund Bartlett.

Over the past two weeks, Bartlett has expressed concern that, despite growth at the macro level, and the classification of many Caribbean nations as middle-income countries, the human population still remains vulnerable as the benefits are not reaching the people at large.

The minister repeated his unease on Sunday evening, during a welcome reception for Spain's Secretary of State for International Cooperation for Latin America and the Caribbean, Fernando Garcia Casas, at the Sangster International Airport in Montego Bay, St James.

Garcia was one of 328 passengers aboard the inaugural Evelop non-stop flight out of Madrid, Spain.

Although the Spanish are the second largest tourism investors in the country, it has taken nine years to seal a deal that has resulted in non-stop flights from Spain here.

Capitalising on having the ear of the government official, Bartlett noted that there was a need to build out the retentive capacity, through agriculture, manufacturing, construction and agro-processing.

He told Garcia that he was seeking his help to make this a reality, along with the work being done by the Tourism Linkages Network, so that Jamaicans can benefit.

"Distribution and retention are serious issues that we grapple with and we must embrace sustainable development as a way of creating a more inclusive sector," he added.

For his part, Garcia revealed that he was looking to strengthen bilateral relationships in the region, particularly, with Brexit hovering over Europe's head.

"We are reliable partners of the Caribbean, and one of the reasons I am here is to see how we can develop cooperation in culture."

Garcia's visit and the arrival of the carrier signalled a renewal of the Spanish market, said Bartlett.

However, with renewed thrust, the country is looking at 12,000 to 13,000 seats out of Portugal and Spain this summer.

The flights arrival is also timely, said the tourism minister, because hotels such as Grupo Excellence have started and the H10 is expected to commence the construction of over 700 rooms by October.

"By 2020, the Spanish will have 10,000 rooms, making them the largest investor in tourism in Jamaica," said Bartlett.