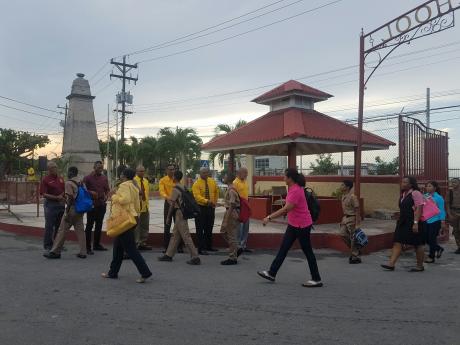 While declaring that positive male role models are scarce in society, members of the Wolmer's Old Boys' Association opted, for the third year running, to greet, via handshake, and impart knowledge to the more than 1,400 student complement that turned out for the start of the new school year on Monday.

The oldest and one of the most prestigious high schools in the Caribbean, Wolmer's Old Boys' Association consists of several prominent businessmen, past and present.

Conceptualised by former chairman and chief executive officer of the GraceKennedy Group, Douglas Orane, the practice of greeting students at the start of the school year is a core component of the mentorship programme operated by the association throughout the school.

"A lot of the boys come from single-mother homes, so we wanted them to see what success looks like," said Wolmer's Old Boys' Association President Kirk Benjamin.

He added: "There are a lot of female teachers here also, so, as men, we must show them (students) that education is very important and they can work and achieve anything. The parents and school administration welcome it and the boys are very appreciative, especially when they see successful old boys like Douglas Orane and Christopher Samuda."

Exhilarating and inspiring were the words used to describe the proceedings by Derrick Clarke, a member of the class of 1971.

"I felt extremely proud to have been a part of this experience. I was particularly impressed with the sixth-formers who lined up along the playing field to monitor the students as they entered through the main gate."

The welcome was followed by a flag-raising ceremony, which was conducted as part of the first general assembly for the school year.