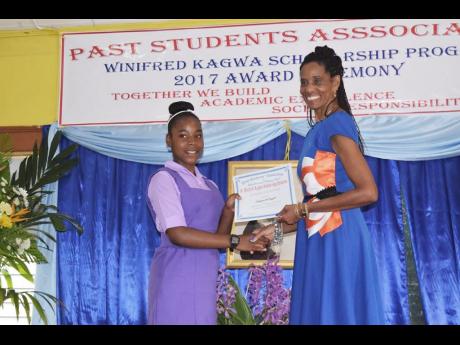 Twelve past students of Bull Savannah Primary School in St Elizabeth received more than $1 million in scholarship money from the G. Winifred Brown Kagwa Scholarship programme and the American Friends of Jamaica on Friday September 8, at an awards ceremony at the school.

The students are from the parish of St Elizabeth and have consistently excelled both academically and in their community activities.

The scholarship was launched earlier that day at a luncheon in honour of the recipients. Eight students who are attending high schools in Manchester and St Elizabeth received $65,000 each and four tertiary students received the sum of $125,000.

In a message, which was read to the scholarship recipients, Jamaica's ambassador to the United States and founder of Jamaica's Promise Foundation, Audrey Marks, reminded them that no matter how humble their beginnings, they can achieve greatness through hard work and determination.

"Remember that whether you work for someone or yourself, do your best. Learn all you can about your future career, pursue your passion, avoid negative critics, and most importantly, in today's technologically advanced world, protect your intellectual property. It is also important to give back to someone else so that you can help to break the cycle of generational poverty."

The school was lauded for its academic excellence by Andrew Mills from the Ministry of Education, Region Five. He said Bull Savannah Primary is the school of choice in the area and parents, especially single mothers, send their children from as early as age two and a half years old.

CHARGE FROM PAST STUDENT

Guest speaker, former principal of Hampton School, Heather Murray, and also a past student of Burnt Savannah Primary, delivered a motivational talk to the students, who eagerly absorbed her every word.

"If it's going to be, it is up to me" was the refrain that Murray used to reinforce to the scholarship winners that Winifred Kagwa has given them a start so it was up to them to make the decision to study hard and make the necessary steps towards achieving their goal.

Armed with a litre of the popular drink 7-UP, Murray said, "I am going to tell you about the seven ups that will take you through your lives. They are get up instead of sitting around waiting for things to happen; dress up by looking the part all the time, shut up because not everything is to be spoken, stand up for your right, look up to God, reach up for what you want, and bless up by practising the attitude of gratitude."