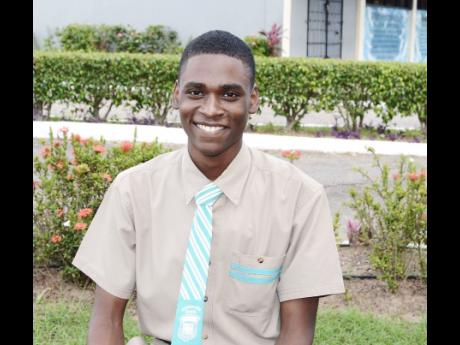 Fifteen-year-old student of Denbigh High School Demoy Lindo is settled in lower sixth form and is now looking back with relief at how he overcame his challenges to earn eight ones and a two in the 2017 Caribbean Education Secondary Certificate (CSEC).

Dedicating a lot of his time to Television Jamaica's Schools' Challenge Quiz, Demoy said by the time he could given full attention to preparing for the CSEC, he realised he had a whole lot of catching up to do.

Among the backlog was his School Based Assessments, lab works to be completed, agricultural pieces to be submitted, electrical documentation, as well as a programme to deliver in information technology, all this just 41 days before the start of the CSEC exams.

"I had many sleepless nights but managed to make it through with the help of my teachers and friends. However, this was all done before the beginning of the one-week break we had before the exams," he said, admitting that he could have made things easier on himself if he hadn't spent so much time playing video games and sleeping hours on end.

"The time rushed by so fast and before I knew it, it was May 9, the first day of exam. The only time I got to study was with the few extra classes I attended and the short intervals between each exam," he shared.

Demoy said his results have come as a total surprise to him because for most of the subject he sat, he left the examination room feeling dejected.

"I had no idea what to write, while others were saying that it was easy. My confidence was low with every passage I wrote and every question I answered. I thought it was the effects of inadequate studying and ill preparation that was coming back to haunt me," he reflected.

Among his grade one subjects are mathematics, English, Spanish and general biology.

Looking ahead, Demoy's dream is to pursue a career in medicine because he says that's where his heart is.

"I am fascinated by the bridge made between chemistry and biology, two of my favourite areas to work medicinal wonders," he said.