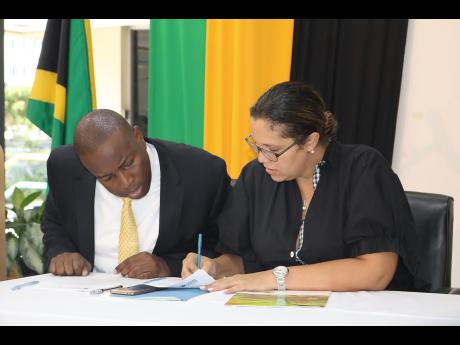 Christopher Serju
Greg Douglas, chief executive officer of the Cannabis Licensing Authority (CLA), takes note of the information brought to his attention by Hyacinth Lightbourne, chairman of the CLA, ahead of the official issuance of the first two licences for the local medical marijuana industry, during a ceremony at the Ministry of Industry, Commerce, Agriculture and Fisheries, New Kingston. 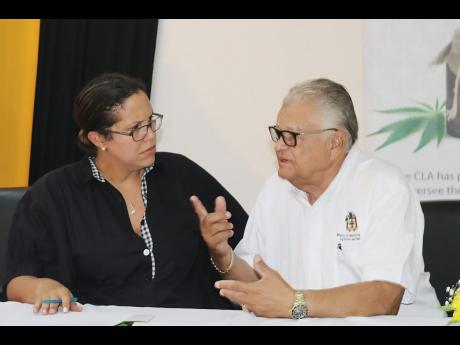 Christopher Serju
Hyacinth Lightbourne, chairman of the Cannabis Licensing Authority, fields a question from Karl Samuda, minister of industry, commerce, agriculture and fisheries, during the official announcement of the granting of the first licences for the medical marijuana industry at his New Kingston office. Epican was granted a tier 1 cultivator licence and will supply Everyting Oily Labs Limited, a tier 1 processor, with the raw material for its operations. 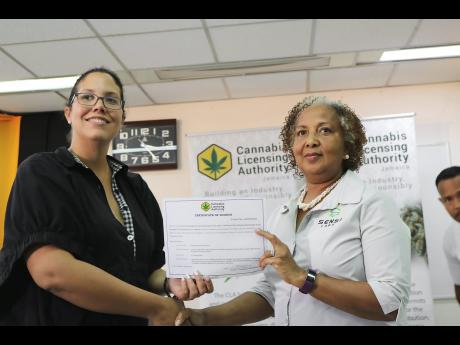 Christopher Serju
Claudine Liu (right) of Everyting Oily Labs Limited displays the licence presented by Hyacinth Lightbourne, chairman of the Cannabis Licensing Authority (CLA), which allows the company the right to legally process ganja. However, it can only purchase ganja from companies such as Epican, which is the only entity granted a licence to date by the CLA, to legally cultivate ganja.
1
2
3

Jamaica's medical marijuana (ganja) industry is finally poised to take root following the granting of two licences: to Epican Medicinals to legally cultivate the herb and Everyting Oily Labs Limited to process the raw material supplied by Epican into oil.

The signing of a tripartite agreement, which will see Everyting Oily buying ganja only from Epican until other licensed cultivators come on stream, was a prerequisite to the start-up of operations of either company. The Cannabis Licensing Authority (CLA), which will take control of the ganja after it is harvested, was the other signatory.

"Epican can start growing tomorrow. Everyting Oil can start producing. We had to make sure the tripartite agreement and other issues were handled. Those have now been issued, and we signed the tripartite today, and so they are free to operate tomorrow," Hyacinth Lightbourne, chairman of the Cannabis Licensing Authority, told Growth & Jobs after last Wednesday's press conference in New Kingston.

"Granting means that the application committee has approved them to commence. The issuing means that they have now been handed their licences. We have a closed the loop system, so in this particular circumstance, we had to make sure that Everyting Oily purchased from someone who was a lawful licence owner. Thus, an agreement has to occur between all the parties," Lightbourne disclosed.

She went on to explain just how the medicinal marijuana industry differed from other business operations.

"The other issue with regard to the tripartite agreement is that one of the requirements as per international regulations is that the CLA has to take custody of all raw products at some point in time. We did not wish to get involved in the business aspect of that. As such, all parties are present for the transfer of the product from the cultivator to the processor, and that's part of the monitoring requirement that we have to undertake."

Rory Liu, founder and chief executive officer of Everyting Oily, was glad that the mega-investment was finally beginning to pay off.

"My facility is all up and running since a year ago, and we just have to wait now for Epican, which is the other licensed to cultivate the ganja because it's a closed-loop system. So they are the only ones I can currently deal with, and when the other cultivators come online, then there will be agreements with them, too, to buy ganja," Liu told Growth & Jobs.

"My business model is 'I'm just processing'. They (Epican) are going to be vertically integrated, but all I am going to be doing is processing and working with other cultivators. So the raw ganja, I'll turn that into oil that then can be mixed into tinctures, sublinguals, topicals, lotions, and stuff like that, and any other medicinal items.

"I will more so sell in bulk so another licensed processor could buy the [ganja] oil in bulk, or if you are a spa you can buy it in bulk and then mix it into your own lotions, and stuff like that, for therapeutic purposes, if you have your formula."

Epican will be much more involved in ganja process, as well as cultivation, Karibe McKenzie revealed.

"The licence we received is to cultivate, so we can begin setting up their plants and begin growing. Our company will be doing our own processing and retailing also, eventually, when we get those licences. We have three more we are waiting on - processing, retail and research and development."