A mother's love is everything 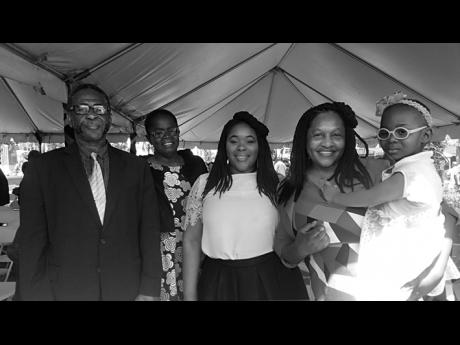 When a mother loves unconditionally a child that she carried in her womb, it is expected and appreciated, but when she takes a child birthed by another and exercises the same motherly love and duties, she is angelic.

Sonia Edwards-Black, a dental nurse at the Mandeville Comprehensive Clinic, sees quite a number of adults and children every day, but three years ago her life changed, when she just could not leave work without a child whose mother could no longer care for her.

"A lady came to the clinic with her daughter and said she couldn't take care of her. My co-workers took the baby and gave her to me. I've had her since the 10th of June, 2014, when she was six weeks old."

Young Timera Brown became a sweet little addition to the Black's family and made complete their happy home.

But then things became difficult.

"Last summer, my son saw that there was something wrong with the baby's eye and he kept telling me, but I really couldn't see anything. He kept insisting and so I took her to an ophthalmologist and from the examination they figured it was retinoblastoma."

Edwards-Black was later sent to do a CT Scan on the baby, which confirmed there was a tumour in the eye.

"I was sent to the University Hospital and after the tests there, we found out it was retinoblastoma in both eyes. There is no treatment in Jamaica for the condition in both eyes."

She had to now weigh her options carefully in order to get the best possible care for her daughter.

"With the help of friends, I got through for St Jude's Children's Hospital in Memphis Tennessee, in the United States, and I went away in October 2016. So far she has received 11 rounds of chemotherapy. She is still receiving treatment for the right eye, but the left eye is stable. She receives the chemotherapy directly in her eye. She has done a procedure to freeze the tumour and has been responding well."

Luckily for Edwards-Black, St Jude's Hospital is doing the procedure for free, and only has the expense of travelling. But having stopped working for a year, the dental nurse revealed that there were difficult moments.

"I just resumed my duties since last year and things were hard, but thankfully my family, friends and co-workers helped me the best way they could. God has been good."

The mother of three said there were times when she missed her family deeply and longed to be home, but she was also very grateful for the opportunity to find treatment for Timera and have her remain alive, as she has witnessed several children dying from the very same condition.

"My family is very supportive ... my friends on Facebook, I mean, they have all been a blessing, and I am grateful to God. I don't worry too much and I am just trusting God.

"My wish for her (Timera) is that she is cancer free and that she grows up to be a meaningful member in society. She is a very bright girl," she ended.