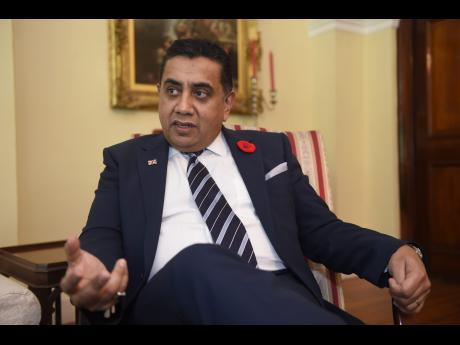 Gladstone Taylor
Lord Tariq Ahmad, British minister of state with responsibility for the Caribbean, Commonwealth and the United Nations.

British Minister of state with responsibility for the Caribbean, Commonwealth and the United Nations, Lord Tariq Ahmad, has warned that a failure to leverage the common heritage between Britain and Jamaica would be a mistake of massive proportions.

Responding to calls for Britain to pay reparation to Jamaica for its role in the slave trade, Ahmad said it would be better for Jamaica to look ahead and to maximise its potential through robust trade rather than to peer into history.

Ahmad, who concluded a Caribbean tour with a visit to Jamaica late last week, after making stops in Barbados and Trinidad and Tobago, said the issue of reparations can only stifle the deep cooperation and opportunities that exist and which can be broadened for economic gain going forward.

"If you look at the context of modern slavery, our prime minister (Theresa May) has been quite clear and we must look at where we are today. I think, historically, if you look at the ties between our two countries, they are very strong," said Ahmad during an interview with The Gleaner.

"We have great strengths, and I think it's important that we now move forward on to a positive agenda of what exists and the opportunities which exist. My visit here is not to look back in history, but to help chart an even richer association between Britain and Jamaica," added Ahmad.

The call for reparation has been growing louder locally in recent years, with Central Clarendon Member of Parliament Mike Henry one of the most vocal.

But Ahmad told The Gleaner that he would rather focus on planning a better future to build bridges of mutual understanding and relations between Britain (home to more than 800,000 Brits with Jamaican heritage) and one of her former colonies.

"These are British people with Jamaican heritage and we need to not only to value that which we do, it's not only celebrating that which we do, but is actually to ensure we leverage the full opportunities of those historical ties."

"So I think it's not important looking back in history. It's about looking forward and that's where my focus is on this visit," said Ahmad.