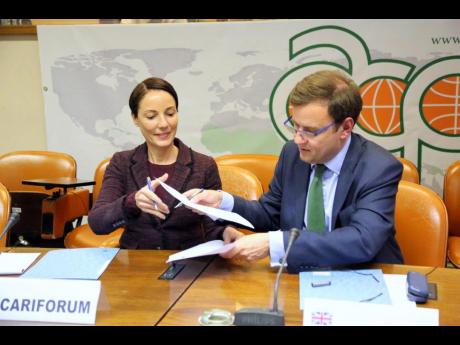 The British Government has agreed that the present terms of the CARIFORUM-EU Economic Partnership Agreement (EPA) will govern its trade relationship with Jamaica and the rest of the region after it leave the European Union.

The EPA is a reciprocal trade agreement between the EU and the ACP Forum of Caribbean states (CARICOM member states plus the Dominican Republic).

Minister of Foreign Affairs and Foreign Trade Kamina Johnson Smith says the agreement was the main outcome of a meeting of CARIFORUM ministers with Greg Hands, UK minister of state for trade policy, last Thursday.

"We have committed to ensuring that the EPA terms will govern CARIFORUM-UK trade arrangements after the UK's withdrawal from the EU," said Johnson Smith.

She said the main aim of the meeting, which she chaired, was to have further discussions on the UK's withdrawal from the EU and the implications for the CARIFORUM-UK trade relationship.

"It was agreed by both ministers that the rollover would benefit the private sectors of the UK and CARIFORUM member states by ensuring continuity in market access," added Johnson Smith.

A joint statement confirming the decision to work towards this objective was signed by the ministers.

"Acknowledging that the UK is not legally permitted to enter into trade negotiations with any third parties before its departure from the EU, rolling over existing arrangements under the EPA is a positive step providing certainty to our private sector.

"CARIFORUM will also continue to work on expanding trade with our valued EU partners," stated Johnson Smith following the signing of the joint statement.

Johnson Smith, who has assumed the role of lead spokesperson for CARIFORUM, led the first formal inter-ministerial discussion with the UK on the post-BREXIT trading arrangements in London in March.

The EPA came into effect, provisionally, on December 29, 2008 with the EU applying duty-free-quota-free market access to all products from CARIFORUM countries, except arms.