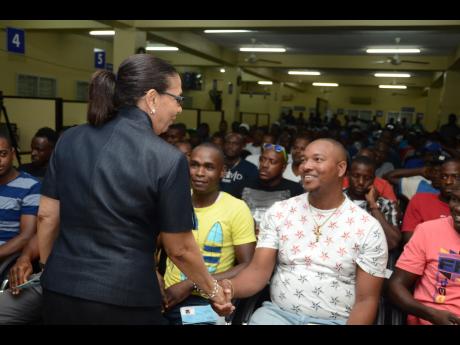 Kenyon Hemans
Shahine Robinson, minister of labour and social security, greets Trevayne Gayle, who will be travelling to Canada on the farm work programme.

Robinson was speaking on Wednesday during a dispatch ceremony for the first batch of farm workers heading to that country for 2018. The ceremony, for 300 men, took place at the ministry's East Street offices.

"As a government, we are seeking to expand the overseas employment programme, both in low-skill and unskilled categories, while at the same time, increase the number of females on the overseas programme. The Canadian government has in fact raised that with us, that they would like to see more women coming in on the programme," the minister said.

"Last year, for the first time, approximately 165 women were employed in the US on the farm work programme. It has been reported that they performed creditably on this pilot programme. I can assure you that the numbers will be increased."

While agreeing that more women are needed in the farm work programme, Robinson indicated that there was a greater need for better trained farm workers generally.

"The potential for increasing and enhancing the programme is feasible, but we must be able to provide better trained workers, and to do so, on a regular basis. Recently, we went to Canada and met with the Canadian minister of labour and we met with the Member of Parliament for Nova Scotia and the objective was to discuss the strengthening and expansion of the programme, for the mutual benefit of both countries."

For more than 50 years, the Seasonal Agricultural Workers Programme has been steadily providing employment opportunities for Jamaicans.

The 2017 calendar year saw a total of 9,367 workers travelling to Canada under SWAP and the low-skill programmes.

Collin Barnes, who hails from St James, told The Gleaner that it would be his first experience on a farm work programme. His desire is to make a good impression on his first trip, so that employers will request him time and time again.

"My cousin gave me a lot of encouragement. He taught me some of the things he learnt over there. He has a phone and he takes pictures with all the processes that he goes through on farm work. I like it. Really and truly, this is my first year, and I would like to go on it for 40 years," he said.