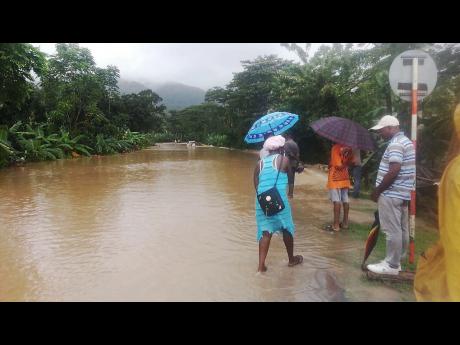 Gareth Davis Sr
Residents discussing how to cross a flooded roadway near Canewood in Portland yesterday.

Up to late yesterday, a section of the roadway in Hope Bay near Canewood was impassable with a pile-up of vehicles on either side as motorists decided not to take on the floodwaters.

The problem was compounded by the persistent rainfall, which caused a nearby river to overflow its banks, dumping several litres of murky water into a nearby banana farm.

A similar situation existed at Spring Garden, just outside of Buff Bay, where several houses were flooded as a result of overnight rainfall leading into yesterday.

At press time yesterday, residents were expressing fear as the continuous rainfall left one river threatening to overflow its banks.

The Sunday Gleaner also received reports of multiple land slippages in the Rio Grande Valley, where residents in several communities including Millbank, Seaman's Valley, and Comfort Castle were marooned.

Emergency responders were unable to visit many of the troubled communities yesterday because of the flooded roads and the continuing torrential downpour.