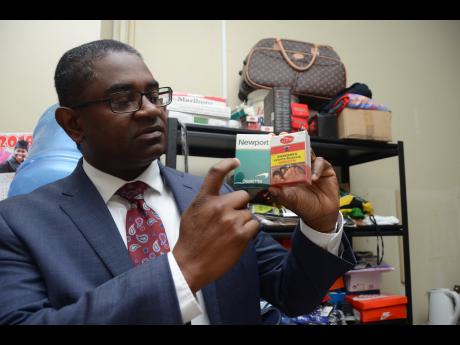 Kenyon Hemans
ASP Victor Barrett shows two packs of cigarettes. The one on the right can be sold legally in Jamaica but not the one on the left.

With counterfeit cigarettes being sold for approximately half the price of legal ones, some smokers could believe they are getting a bargain, but if you thought regular cigarettes were unhealthy, wait until you hear what is inside their counterfeit counterparts.

Usually manufactured in some unregulated plants, a research team in the United States has found that there were much higher concentrations of toxic heavy metals consistently found in counterfeit cigarettes that were seized in America compared to genuine brands, and that is not surprising to Assistant Superintendent of Police Victor Barrett of the Counter-Terrorism and Organised Crime Investigation Branch.

"For the counterfeit cigarette, we don't know the component. we have heard stories where even rat faeces were used as component parts of cigarettes.

"It's not regulated, so there's no oversight, so they can use any ingredient. They use sawdust. They use anything to make the cigarettes, and when it is traced back, you won't be able to trace it to the legitimate company," Barrett told The Sunday Gleaner.

Barrett and his team seized counterfeit cigarettes valued at $5 million last week, and he urged Jamaicans to be careful "because some people just want to make money and they don't care about how they go about making that money".

He noted that a graphic health warning must be present on the package of all cigarettes sold in Jamaica.

"When you look at the labelling, we have a graphic health warning by the chief medical officer. Some of these cigarettes that are imported have chief medical practitioner or chief surgeon. Once you see that, you know it's not for this market," added Barrett.

Substance abuse officer at The National Council on Drug Abuse Daniel Brown says that from his experience, mature persons are more likely to purchase the fake cigarettes, but most are not aware of the ingredients.

"Some of the clients that I have seen actually smoke the fake cigarettes because the real ones are, basically, a little bit expensive. So although the taste is different, they compromise on taste for the price.

"What we found out is that most of them don't know that sawdust and different ingredients from rat poison and additional chemicals are in it. Most of them don't know exactly what it is, so it's when they come to counselling, and we start talking to them, then they realise exactly how dangerous the fake cigarettes are," said Brown.

He charged that the fake cigarettes are doing 50 per cent more damage to smokers.

"I, basically, tell them this: 'when you smoke the fake cigarette it's like you are putting nitro in a car that speeds up the process and destroys the body much faster', so we are saying, instead of seeing damage over a five to 10-year period, it can actually speed up the process because of the additional chemicals that are inside of it," said Brown.

The illicit trade in cigarettes has been an ongoing challenge not only for the legal tobacco industry, but also for the Government, which is estimated to lose almost $5 billion in revenue annually as a result of this illicit trade.