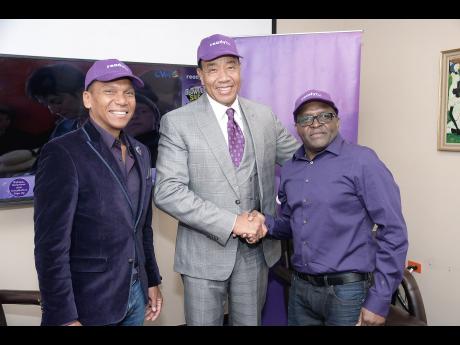 Contributed
Michael Lee-Chin (centre), chairman of AIC Jamaica, is all smiles as he shares a handshake with David Casanova (right), co-CEO of ReadyTV while Chris Dehring looks on.

Lee-Chin has expressed satisfaction with the progress of the start-up telecommunications firm led by David Cassanova and Chris Dehring, and while the level of investment has not been disclosed, the parties say AIC is now the single largest shareholder in ReadyTV.

"We are excited by both the commercial opportunity and the positive socio-economic impact this service will have on all Jamaicans. We see ReadyTV, and its unique business model and technology, as a vehicle to bridge the digital divide and bring more people into the digital world," said Lee-Chin.

He added that he was pleased to join forces with the main principals behind the project.

"We know exactly what we get with Chris, given his track record of innovation, energy and leadership. And we are equally proud to haven gotten to know David, who has designed and implemented ReadyTV's state-of-the art digital network, truly a leader and innovator in his field. They make a great team."

ReadyTV was launched in May 2017 and has already caused a buzz with its digital service.

"We see ourselves as facilitating the digital switch-over in Jamaica," said Dehring, who is the co-CEO of ReadyTV along with Cassanova.

Calming coffee concerns - Grant moves to allay fears of Mavis Bank residents that Lee-Chin is set to relocate factory
Diaspora Conference | 'Get on the economic train or be left behind' - Lee-Chin tells diaspora stage set for Jamaica's growth
Take it down! - Billionaire Lee-Chin in wrangle with fraudsters over online scam
Jamaica Producers confirms sale of Mavis Bank coffee business
NCB does not legally own Guardian stake - Records show Lee-Chin's AIC owns company that owns GHL shares - Bank says it controls the board