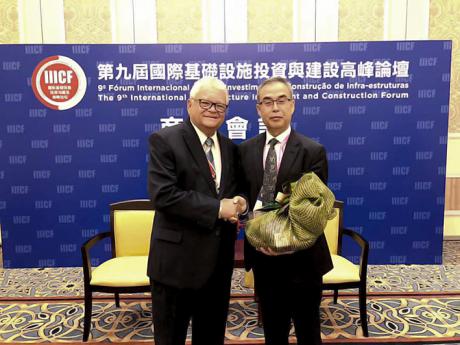 Contributed
Minister without Portfolio in the Ministry of Economic Growth and Job Creation Karl Samuda (left), presents a token to vice president of the China International Contractors Association, Xin Xiuming following a meeting in Macau, China on June 6.

Minister without Portfolio in the Ministry of Economic Growth and Job Creation Karl Samuda has encouraged Chinese companies to continue investing in Jamaica's infrastructure.

He was speaking earlier this week at the 9th Infrastructure, Investment and Construction Forum in Macau, China.

In his address to the forum, Samuda noted that Chinese companies such as China Harbour Engineering Company (CHEC) and the Jiuquan Iron and Steel Company (JISCO) have invested heavily in the country's infrastructure recently. He said that the two companies have already spent over US$1 billion on infrastructural projects in Jamaica, and there are plans for further investments.

Samuda also said that he was looking forward to additional partnerships between China and Jamaica under the Belt and Road Initiative.

In the meantime, he met with vice-president of the China Communications Construction Company (CCCC), Sun Ziyu; vice-president of CCCC's overseas division, Chen Zhong; and Chairman of CHEC Lin Yichong. During the meeting, CCCC officials shared priority projects with Samuda. The company also restated its commitment to future investments in Jamaica. CCCC is the parent company of CHEC.

Samuda will meet with officials from the Chinese EXIM Bank before returning to the island on Tuesday, June 12.